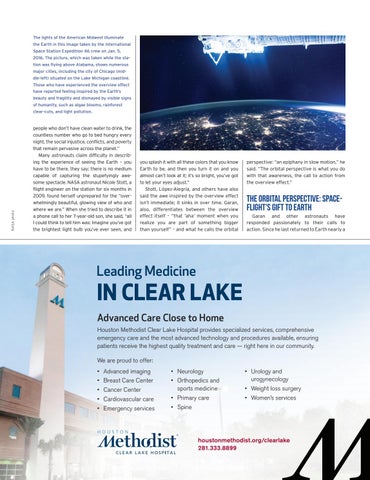 The lights of the American Midwest illuminate the Earth in this image taken by the International Space Station Expedition 46 crew on Jan. 5, 2016. The picture, which was taken while the station was flying above Alabama, shows numerous major cities, including the city of Chicago (middle-left) situated on the Lake Michigan coastline. Those who have experienced the overview effect have reported feeling inspired by the Earth’s beauty and fragility and dismayed by visible signs of humanity, such as algae blooms, rainforest

people who don’t have clean water to drink, the countless number who go to bed hungry every night, the social injustice, conflicts, and poverty that remain pervasive across the planet.” Many astronauts claim difficulty in describing the experience of seeing the Earth – you have to be there, they say; there is no medium capable of capturing the stupefyingly awesome spectacle. NASA astronaut Nicole Stott, a flight engineer on the station for six months in 2009, found herself unprepared for the “overwhelmingly beautiful, glowing view of who and where we are.” When she tried to describe it in a phone call to her 7-year-old son, she said, “all I could think to tell him was: Imagine you’ve got the brightest light bulb you’ve ever seen, and

you splash it with all these colors that you know Earth to be, and then you turn it on and you almost can’t look at it; it’s so bright, you’ve got to let your eyes adjust.” Stott, López-Alegría, and others have also said the awe inspired by the overview effect isn’t immediate; it sinks in over time. Garan, also, differentiates between the overview effect itself – “that ‘aha’ moment when you realize you are part of something bigger than yourself” – and what he calls the orbital

perspective: “an epiphany in slow motion,” he said. “The orbital perspective is what you do with that awareness, the call to action from the overview effect.”

THE ORBITAL PERSPECTIVE: SPACEFLIGHT’S GIFT TO EARTH Garan and other astronauts have responded passionately to their calls to action. Since he last returned to Earth nearly a