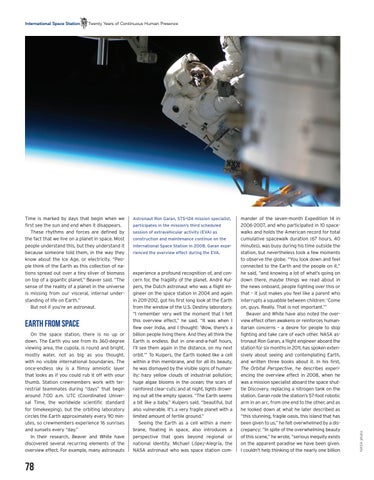 Time is marked by days that begin when we first see the sun and end when it disappears. These rhythms and forces are defined by the fact that we live on a planet in space. Most people understand this, but they understand it because someone told them, in the way they know about the Ice Age, or electricity. “People think of the Earth as this collection of nations spread out over a tiny sliver of biomass on top of a gigantic planet,” Beaver said. “The sense of the reality of a planet in the universe is missing from our visceral, internal understanding of life on Earth.” But not if you’re an astronaut.

EARTH FROM SPACE On the space station, there is no up or down. The Earth you see from its 360-degree viewing area, the cupola, is round and bright, mostly water, not as big as you thought, with no visible international boundaries. The once-endless sky is a flimsy amniotic layer that looks as if you could rub it off with your thumb. Station crewmembers work with terrestrial teammates during “days” that begin around 7:00 a.m. UTC (Coordinated Universal Time, the worldwide scientific standard for timekeeping), but the orbiting laboratory circles the Earth approximately every 90 minutes, so crewmembers experience 16 sunrises and sunsets every “day.” In their research, Beaver and White have discovered several recurring elements of the overview effect. For example, many astronauts

Astronaut Ron Garan, STS-124 mission specialist, participates in the mission’s third scheduled session of extravehicular activity (EVA) as construction and maintenance continue on the International Space Station in 2008. Garan experienced the overview effect during the EVA.

experience a profound recognition of, and concern for, the fragility of the planet. André Kuipers, the Dutch astronaut who was a flight engineer on the space station in 2004 and again in 2011-2012, got his first long look at the Earth from the window of the U.S. Destiny laboratory. “I remember very well the moment that I felt this overview effect,” he said. “It was when I flew over India, and I thought: ‘Wow, there’s a billion people living there. And they all think the Earth is endless. But in one-and-a-half hours, I’ll see them again in the distance, on my next orbit.’” To Kuipers, the Earth looked like a cell within a thin membrane, and for all its beauty, he was dismayed by the visible signs of humanity: hazy yellow clouds of industrial pollution; huge algae blooms in the ocean; the scars of rainforest clear-cuts; and at night, lights drowning out all the empty spaces. “The Earth seems a bit like a baby,” Kuipers said, “beautiful, but also vulnerable. It’s a very fragile planet with a limited amount of fertile ground.” Seeing the Earth as a cell within a membrane, floating in space, also introduces a perspective that goes beyond regional or national identity. Michael López-Alegría, the NASA astronaut who was space station com-

mander of the seven-month Expedition 14 in 2006-2007, and who participated in 10 spacewalks and holds the American record for total cumulative spacewalk duration (67 hours, 40 minutes), was busy during his time outside the station, but nevertheless took a few moments to observe the globe. “You look down and feel connected to the Earth and the people on it,” he said, “and knowing a lot of what’s going on down there, maybe things we read about in the news onboard, people fighting over this or that – it just makes you feel like a parent who interrupts a squabble between children: ‘Come on, guys. Really. That is not important.’” Beaver and White have also noted the overview effect often awakens or reinforces humanitarian concerns – a desire for people to stop fighting and take care of each other. NASA astronaut Ron Garan, a flight engineer aboard the station for six months in 2011, has spoken extensively about seeing and contemplating Earth, and written three books about it. In his first, The Orbital Perspective, he describes experiencing the overview effect in 2008, when he was a mission specialist aboard the space shuttle Discovery, replacing a nitrogen tank on the station. Garan rode the station’s 57-foot robotic arm in an arc, from one end to the other, and as he looked down at what he later described as “this stunning, fragile oasis, this island that has been given to us,” he felt overwhelmed by a discrepancy: “In spite of the overwhelming beauty of this scene,” he wrote, “serious inequity exists on the apparent paradise we have been given. I couldn’t help thinking of the nearly one billion