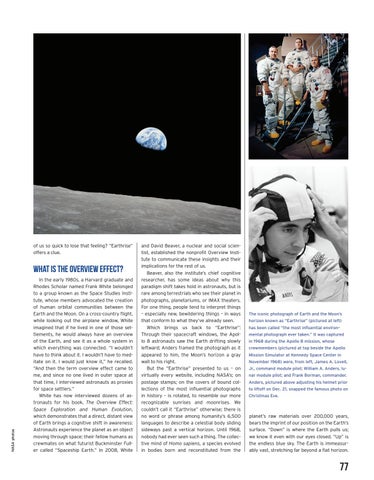 of us so quick to lose that feeling? “Earthrise” offers a clue.

WHAT IS THE OVERVIEW EFFECT? In the early 1980s, a Harvard graduate and Rhodes Scholar named Frank White belonged to a group known as the Space Studies Institute, whose members advocated the creation of human orbital communities between the Earth and the Moon. On a cross-country flight, while looking out the airplane window, White imagined that if he lived in one of those settlements, he would always have an overview of the Earth, and see it as a whole system in which everything was connected. “I wouldn’t have to think about it. I wouldn’t have to meditate on it. I would just know it,” he recalled. “And then the term overview effect came to me, and since no one lived in outer space at that time, I interviewed astronauts as proxies for space settlers.” White has now interviewed dozens of astronauts for his book, The Overview Effect: Space Exploration and Human Evolution, which demonstrates that a direct, distant view of Earth brings a cognitive shift in awareness: Astronauts experience the planet as an object moving through space; their fellow humans as crewmates on what futurist Buckminster Fuller called “Spaceship Earth.” In 2008, White

and David Beaver, a nuclear and social scientist, established the nonprofit Overview Institute to communicate these insights and their implications for the rest of us. Beaver, also the institute’s chief cognitive researcher, has some ideas about why this paradigm shift takes hold in astronauts, but is rare among terrestrials who see their planet in photographs, planetariums, or IMAX theaters. For one thing, people tend to interpret things – especially new, bewildering things – in ways that conform to what they’ve already seen. Which brings us back to “Earthrise”: Through their spacecraft windows, the Apollo 8 astronauts saw the Earth drifting slowly leftward; Anders framed the photograph as it appeared to him, the Moon’s horizon a gray wall to his right. But the “Earthrise” presented to us – on virtually every website, including NASA’s; on postage stamps; on the covers of bound collections of the most influential photographs in history – is rotated, to resemble our more recognizable sunrises and moonrises. We couldn’t call it “Earthrise” otherwise; there is no word or phrase among humanity’s 6,500 languages to describe a celestial body sliding sideways past a vertical horizon. Until 1968, nobody had ever seen such a thing. The collective mind of Homo sapiens, a species evolved in bodies born and reconstituted from the

The iconic photograph of Earth and the Moon’s horizon known as “Earthrise” (pictured at left) has been called “the most influential environmental photograph ever taken.” It was captured in 1968 during the Apollo 8 mission, whose crewmembers (pictured at top beside the Apollo Mission Simulator at Kennedy Space Center in November 1968) were, from left, James A. Lovell, Jr., command module pilot; William A. Anders, lunar module pilot; and Frank Borman, commander. Anders, pictured above adjusting his helmet prior to liftoff on Dec. 21, snapped the famous photo on Christmas Eve.

planet’s raw materials over 200,000 years, bears the imprint of our position on the Earth’s surface. “Down” is where the Earth pulls us; we know it even with our eyes closed. “Up” is the endless blue sky. The Earth is immeasurably vast, stretching far beyond a flat horizon.