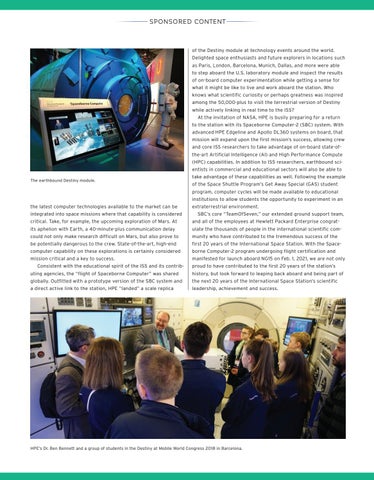 of the Destiny module at technology events around the world. Delighted space enthusiasts and future explorers in locations such as Paris, London, Barcelona, Munich, Dallas, and more were able to step aboard the U.S. laboratory module and inspect the results of on-board computer experimentation while getting a sense for what it might be like to live and work aboard the station. Who knows what scientific curiosity or perhaps greatness was inspired among the 50,000-plus to visit the terrestrial version of Destiny while actively linking in real time to the ISS? At the invitation of NASA, HPE is busily preparing for a return to the station with its Spaceborne Computer-2 (SBC) system. With advanced HPE Edgeline and Apollo DL360 systems on board, that mission will expand upon the first mission’s success, allowing crew and core ISS researchers to take advantage of on-board state-ofthe-art Artificial Intelligence (AI) and High Performance Compute (HPC) capabilities. In addition to ISS researchers, earthbound scientists in commercial and educational sectors will also be able to The earthbound Destiny module.

take advantage of these capabilities as well. Following the example of the Space Shuttle Program’s Get Away Special (GAS) student program, computer cycles will be made available to educational institutions to allow students the opportunity to experiment in an

critical. Take, for example, the upcoming exploration of Mars. At

and all of the employees at Hewlett Packard Enterprise congrat-

its aphelion with Earth, a 40-minute-plus communication delay

ulate the thousands of people in the international scientific com-

could not only make research difficult on Mars, but also prove to

munity who have contributed to the tremendous success of the

be potentially dangerous to the crew. State-of-the-art, high-end

first 20 years of the International Space Station. With the Space-

computer capability on these explorations is certainly considered

mission critical and a key to success.

Consistent with the educational spirit of the ISS and its contrib-

uting agencies, the “flight of Spaceborne Computer” was shared

history, but look forward to leaping back aboard and being part of

globally. Outfitted with a prototype version of the SBC system and

the next 20 years of the International Space Station’s scientific

a direct active link to the station, HPE “landed” a scale replica

HPE’s Dr. Ben Bennett and a group of students in the Destiny at Mobile World Congress 2018 in Barcelona.