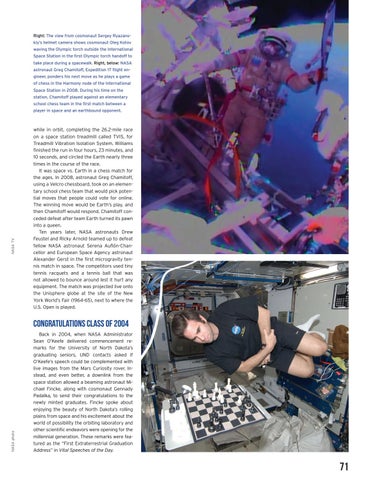 Right: The view from cosmonaut Sergey Ryazanskiy’s helmet camera shows cosmonaut Oleg Kotov waving the Olympic torch outside the International Space Station in the first Olympic torch handoff to take place during a spacewalk. Right, below: NASA astronaut Greg Chamitoff, Expedition 17 flight engineer, ponders his next move as he plays a game of chess in the Harmony node of the International Space Station in 2008. During his time on the station, Chamitoff played against an elementary school chess team in the first match between a

player in space and an earthbound opponent.

while in orbit, completing the 26.2-mile race on a space station treadmill called TVIS, for Treadmill Vibration Isolation System. Williams finished the run in four hours, 23 minutes, and 10 seconds, and circled the Earth nearly three times in the course of the race. It was space vs. Earth in a chess match for the ages. In 2008, astronaut Greg Chamitoff, using a Velcro chessboard, took on an elementary school chess team that would pick potential moves that people could vote for online. The winning move would be Earth’s play, and then Chamitoff would respond. Chamitoff conceded defeat after team Earth turned its pawn into a queen. Ten years later, NASA astronauts Drew Feustel and Ricky Arnold teamed up to defeat fellow NASA astronaut Serena Auñón-Chancellor and European Space Agency astronaut Alexander Gerst in the first microgravity tennis match in space. The competitors used tiny tennis racquets and a tennis ball that was not allowed to bounce around lest it hurt any equipment. The match was projected live onto the Unisphere globe at the site of the New York World’s Fair (1964-65), next to where the U.S. Open is played.

CONGRATULATIONS CLASS OF 2004 Back in 2004, when NASA Administrator Sean O’Keefe delivered commencement remarks for the University of North Dakota’s graduating seniors, UND contacts asked if O’Keefe’s speech could be complemented with live images from the Mars Curiosity rover. Instead, and even better, a downlink from the space station allowed a beaming astronaut Michael Fincke, along with cosmonaut Gennady Padalka, to send their congratulations to the newly minted graduates. Fincke spoke about enjoying the beauty of North Dakota’s rolling plains from space and his excitement about the world of possibility the orbiting laboratory and other scientific endeavors were opening for the millennial generation. These remarks were featured as the “First Extraterrestrial Graduation Address” in Vital Speeches of the Day.