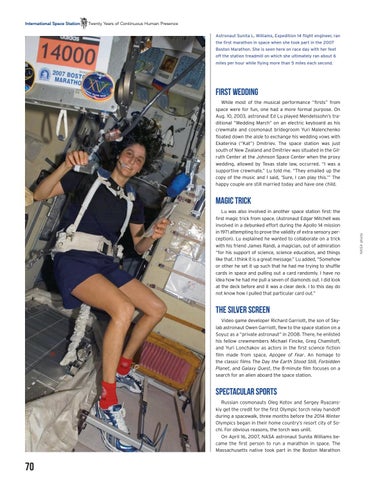 Twenty Years of Continuous Human Presence Astronaut Sunita L. Williams, Expedition 14 flight engineer, ran the first marathon in space when she took part in the 2007 Boston Marathon. She is seen here on race day with her feet off the station treadmill on which she ultimately ran about 6 miles per hour while flying more than 5 miles each second.

FIRST WEDDING While most of the musical performance “firsts” from space were for fun, one had a more formal purpose. On Aug. 10, 2003, astronaut Ed Lu played Mendelssohn’s traditional “Wedding March” on an electric keyboard as his crewmate and cosmonaut bridegroom Yuri Malenchenko floated down the aisle to exchange his wedding vows with Ekaterina (“Kat”) Dmitriev. The space station was just south of New Zealand and Dmitriev was situated in the Gilruth Center at the Johnson Space Center when the proxy wedding, allowed by Texas state law, occurred. “I was a supportive crewmate,” Lu told me. “They emailed up the copy of the music and I said, ‘Sure, I can play this.’” The happy couple are still married today and have one child.

Lu was also involved in another space station first: the first magic trick from space. (Astronaut Edgar Mitchell was involved in a debunked effort during the Apollo 14 mission in 1971 attempting to prove the validity of extra sensory perception). Lu explained he wanted to collaborate on a trick with his friend James Randi, a magician, out of admiration “for his support of science, science education, and things like that. I think it is a great message.” Lu added, “Somehow or other he set it up such that he had me trying to shuffle cards in space and pulling out a card randomly. I have no idea how he had me pull a seven of diamonds out. I did look at the deck before and it was a clear deck. I to this day do not know how I pulled that particular card out.”

THE SILVER SCREEN Video game developer Richard Garriott, the son of Skylab astronaut Owen Garriott, flew to the space station on a Soyuz as a “private astronaut” in 2008. There, he enlisted his fellow crewmembers Michael Fincke, Greg Chamitoff, and Yuri Lonchakov as actors in the first science fiction film made from space, Apogee of Fear. An homage to the classic films The Day the Earth Stood Still, Forbidden Planet, and Galaxy Quest, the 8-minute film focuses on a search for an alien aboard the space station.

SPECTACULAR SPORTS Russian cosmonauts Oleg Kotov and Sergey Ryazanskiy get the credit for the first Olympic torch relay handoff during a spacewalk, three months before the 2014 Winter Olympics began in their home country’s resort city of Sochi. For obvious reasons, the torch was unlit. On April 16, 2007, NASA astronaut Sunita Williams became the first person to run a marathon in space. The Massachusetts native took part in the Boston Marathon