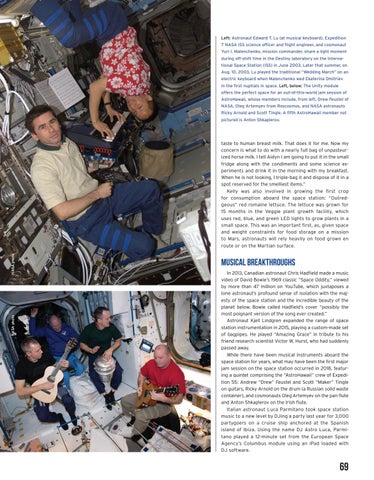 Left: Astronaut Edward T. Lu (at musical keyboard), Expedition 7 NASA ISS science officer and flight engineer, and cosmonaut Yuri I. Malenchenko, mission commander, share a light moment during off-shift time in the Destiny laboratory on the International Space Station (ISS) in June 2003. Later that summer, on Aug. 10, 2003, Lu played the traditional “Wedding March” on an electric keyboard when Malenchenko wed Ekaterina Dmitriev in the first nuptials in space. Left, below: The Unity module offers the perfect space for an out-of-this-world jam session of AstroHawaii, whose members include, from left, Drew Feustel of NASA, Oleg Artemyev from Roscosmos, and NASA astronauts Ricky Arnold and Scott Tingle. A fifth AstroHawaii member not pictured is Anton Shkaplerov.

taste to human breast milk. That does it for me. Now my concern is what to do with a nearly full bag of unpasteurized horse milk. I tell Aidyn I am going to put it in the small fridge along with the condiments and some science experiments and drink it in the morning with my breakfast. When he is not looking, I triple-bag it and dispose of it in a spot reserved for the smelliest items.” Kelly was also involved in growing the first crop for consumption aboard the space station: “Outredgeous” red romaine lettuce. The lettuce was grown for 15 months in the Veggie plant growth facility, which uses red, blue, and green LED lights to grow plants in a small space. This was an important first, as, given space and weight constraints for food storage on a mission to Mars, astronauts will rely heavily on food grown en route or on the Martian surface.

MUSICAL BREAKTHROUGHS In 2013, Canadian astronaut Chris Hadfield made a music video of David Bowie’s 1969 classic “Space Oddity,” viewed by more than 47 million on YouTube, which juxtaposes a lone astronaut’s profound sense of isolation with the majesty of the space station and the incredible beauty of the planet below. Bowie called Hadfield’s cover “possibly the most poignant version of the song ever created.” Astronaut Kjell Lindgren expanded the range of space station instrumentation in 2015, playing a custom-made set of bagpipes. He played “Amazing Grace” in tribute to his friend research scientist Victor W. Hurst, who had suddenly passed away. While there have been musical instruments aboard the space station for years, what may have been the first major jam session on the space station occurred in 2018, featuring a quintet comprising the “AstroHawaii” crew of Expedition 55: Andrew “Drew” Feustel and Scott “Maker” Tingle on guitars, Ricky Arnold on the drum (a Russian solid waste container), and cosmonauts Oleg Artemyev on the pan flute and Anton Shkaplerov on the Irish flute. Italian astronaut Luca Parmitano took space station music to a new level by DJing a party last year for 3,000 partygoers on a cruise ship anchored at the Spanish island of Ibiza. Using the name DJ Astro Luca, Parmitano played a 12-minute set from the European Space Agency’s Columbus module using an iPad loaded with DJ software.