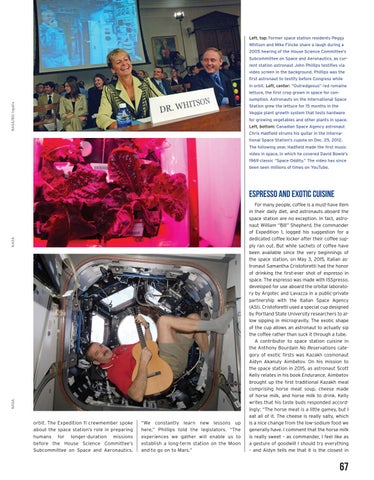 Left, top: Former space station residents Peggy Whitson and Mike Fincke share a laugh during a 2005 hearing of the House Science Committee’s Subcommittee on Space and Aeronautics, as current station astronaut John Phillips testifies via video screen in the background. Phillips was the first astronaut to testify before Congress while in orbit. Left, center: “Outredgeous” red romaine lettuce, the first crop grown in space for conNASA/Bill Ingalls

sumption. Astronauts on the International Space Station grew the lettuce for 15 months in the Veggie plant growth system that tests hardware for growing vegetables and other plants in space. Left, bottom: Canadian Space Agency astronaut Chris Hadfield strums his guitar in the International Space Station’s cupola on Dec. 25, 2012. The following year, Hadfield made the first music video in space, in which he covered David Bowie’s 1969 classic “Space Oddity.” The video has since been seen millions of times on YouTube.

orbit. The Expedition 11 crewmember spoke about the space station’s role in preparing humans for longer-duration missions before the House Science Committee’s Subcommittee on Space and Aeronautics.

“We constantly learn new lessons up here,” Phillips told the legislators. “The experiences we gather will enable us to establish a long-term station on the Moon and to go on to Mars.”

For many people, coffee is a must-have item in their daily diet, and astronauts aboard the space station are no exception. In fact, astronaut William “Bill” Shepherd, the commander of Expedition 1, logged his suggestion for a dedicated coffee locker after their coffee supply ran out. But while sachets of coffee have been available since the very beginnings of the space station, on May 3, 2015, Italian astronaut Samantha Cristoforetti had the honor of drinking the first-ever shot of espresso in space. The espresso was made with ISSpresso, developed for use aboard the orbital laboratory by Argotec and Lavazza in a public-private partnership with the Italian Space Agency (ASI). Cristoforetti used a special cup designed by Portland State University researchers to allow sipping in microgravity. The exotic shape of the cup allows an astronaut to actually sip the coffee rather than suck it through a tube. A contributor to space station cuisine in the Anthony Bourdain No Reservations category of exotic firsts was Kazakh cosmonaut Aidyn Akanuly Aimbetov. On his mission to the space station in 2015, as astronaut Scott Kelly relates in his book Endurance, Aimbetov brought up the first traditional Kazakh meal comprising horse meat soup, cheese made of horse milk, and horse milk to drink. Kelly writes that his taste buds responded accordingly: “The horse meat is a little gamey, but I eat all of it. The cheese is really salty, which is a nice change from the low-sodium food we generally have. I comment that the horse milk is really sweet – as commander, I feel like as a gesture of goodwill I should try everything – and Aidyn tells me that it is the closest in