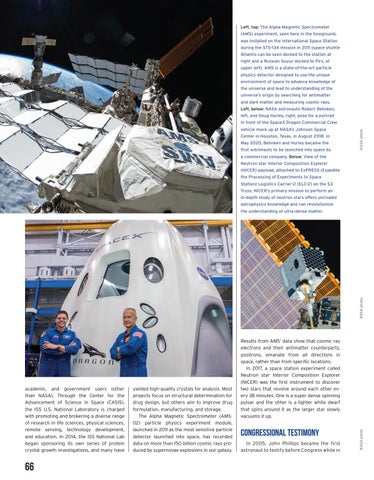 Left, top: The Alpha Magnetic Spectrometer (AMS) experiment, seen here in the foreground, was installed on the International Space Station during the STS-134 mission in 2011 (space shuttle Atlantis can be seen docked to the station at right and a Russian Soyuz docked to Pirs, at upper left). AMS is a state-of-the-art particle physics detector designed to use the unique environment of space to advance knowledge of the universe and lead to understanding of the universe’s origin by searching for antimatter and dark matter and measuring cosmic rays. Left, below: NASA astronauts Robert Behnken, left, and Doug Hurley, right, pose for a portrait vehicle mock up at NASA’s Johnson Space Center in Houston, Texas, in August 2018. In May 2020, Behnken and Hurley became the first astronauts to be launched into space by

in front of the SpaceX Dragon Commercial Crew

a commercial company. Below: View of the Neutron star Interior Composition Explorer (NICER) payload, attached to ExPRESS (Expedite the Processing of Experiments to Space Station) Logistics Carrier-2 (ELC-2) on the S3 Truss. NICER’s primary mission to perform an in-depth study of neutron stars offers unrivaled astrophysics knowledge and can revolutionize

the understanding of ultra-dense matter.

yielded high-quality crystals for analysis. Most projects focus on structural determination for drug design, but others aim to improve drug formulation, manufacturing, and storage. The Alpha Magnetic Spectrometer (AMS02) particle physics experiment module, launched in 2011 as the most sensitive particle detector launched into space, has recorded data on more than 150 billion cosmic rays produced by supernovae explosions in our galaxy.

CONGRESSIONAL TESTIMONY In 2005, John Phillips became the first astronaut to testify before Congress while in

academic, and government users (other than NASA). Through the Center for the Advancement of Science in Space (CASIS), the ISS U.S. National Laboratory is charged with promoting and brokering a diverse range of research in life sciences, physical sciences, remote sensing, technology development, and education. In 2014, the ISS National Lab began sponsoring its own series of protein crystal growth investigations, and many have

Results from AMS’ data show that cosmic ray electrons and their antimatter counterparts, positrons, emanate from all directions in space, rather than from specific locations. In 2017, a space station experiment called Neutron star Interior Composition Explorer (NICER) was the first instrument to discover two stars that revolve around each other every 38 minutes. One is a super dense spinning pulsar and the other is a lighter white dwarf that spins around it as the larger star slowly vacuums it up.