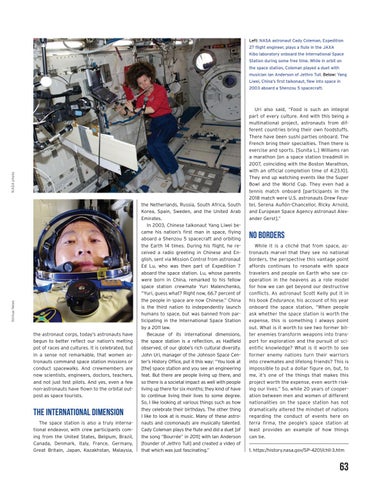 Left: NASA astronaut Cady Coleman, Expedition 27 flight engineer, plays a flute in the JAXA Kibo laboratory onboard the International Space Station during some free time. While in orbit on the space station, Coleman played a duet with musician Ian Anderson of Jethro Tull. Below: Yang Liwei, China’s first taikonaut, flew into space in

the astronaut corps, today’s astronauts have begun to better reflect our nation’s melting pot of races and cultures. It is celebrated, but in a sense not remarkable, that women astronauts command space station missions or conduct spacewalks. And crewmembers are now scientists, engineers, doctors, teachers, and not just test pilots. And yes, even a few non-astronauts have flown to the orbital outpost as space tourists.

the Netherlands, Russia, South Africa, South Korea, Spain, Sweden, and the United Arab Emirates. In 2003, Chinese taikonaut Yang Liwei became his nation’s first man in space, flying aboard a Shenzou 5 spacecraft and orbiting the Earth 14 times. During his flight, he received a radio greeting in Chinese and English, sent via Mission Control from astronaut Ed Lu, who was then part of Expedition 7 aboard the space station. Lu, whose parents were born in China, remarked to his fellow space station crewmate Yuri Malenchenko, “Yuri, guess what? Right now, 66.7 percent of the people in space are now Chinese.” China is the third nation to independently launch humans to space, but was banned from participating in the International Space Station by a 2011 law. Because of its international dimensions, the space station is a reflection, as Hadfield observed, of our globe’s rich cultural diversity. John Uri, manager of the Johnson Space Center’s History Office, put it this way: “You look at [the] space station and you see an engineering feat. But there are people living up there, and so there is a societal impact as well with people living up there for six months; they kind of have to continue living their lives to some degree. So, I like looking at various things such as how they celebrate their birthdays. The other thing I like to look at is music. Many of these astronauts and cosmonauts are musically talented. Cady Coleman plays the flute and did a duet [of the song “Bourrée” in 2011] with Ian Anderson [founder of Jethro Tull] and created a video of that which was just fascinating.”

Uri also said, “Food is such an integral part of every culture. And with this being a multinational project, astronauts from different countries bring their own foodstuffs. There have been sushi parties onboard. The French bring their specialties. Then there is exercise and sports. [Sunita L.] Williams ran a marathon [on a space station treadmill in 2007, coinciding with the Boston Marathon, with an official completion time of 4:23.10]. They end up watching events like the Super Bowl and the World Cup. They even had a tennis match onboard [participants in the 2018 match were U.S. astronauts Drew Feustel, Serena Auñón-Chancellor, Ricky Arnold, and European Space Agency astronaut Alexander Gerst].”

NO BORDERS While it is a cliché that from space, astronauts marvel that they see no national borders, the perspective this vantage point affords continues to resonate with space travelers and people on Earth who see cooperation in the heavens as a role model for how we can get beyond our destructive conflicts. As astronaut Scott Kelly put it in his book Endurance, his account of his year onboard the space station, “When people ask whether the space station is worth the expense, this is something I always point out. What is it worth to see two former bitter enemies transform weapons into transport for exploration and the pursuit of scientific knowledge? What is it worth to see former enemy nations turn their warriors into crewmates and lifelong friends? This is impossible to put a dollar figure on, but, to me, it’s one of the things that makes this project worth the expense, even worth risking our lives.” So, while 20 years of cooperation between men and women of different nationalities on the space station has not dramatically altered the mindset of nations regarding the conduct of events here on terra firma, the people’s space station at least provides an example of how things can be. 1. https:/history.nasa.gov/SP-4201/chll-3.htm