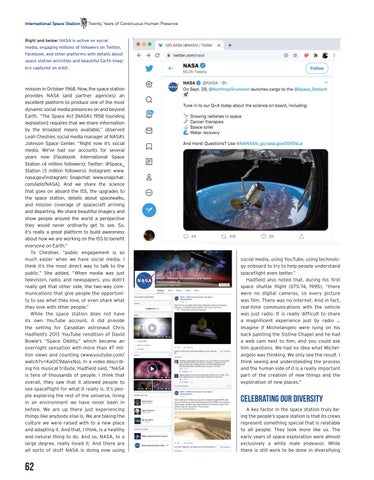 Right and below: NASA is active on social media, engaging millions of followers on Twitter, Facebook, and other platforms with details about space station activities and beautiful Earth imagery captured on orbit.

mission in October 1968. Now, the space station provides NASA (and partner agencies) an excellent platform to produce one of the most dynamic social media presences on and beyond Earth. “The Space Act [NASA’s 1958 founding legislation] requires that we share information by the broadest means available,” observed Leah Cheshier, social media manager at NASA’s Johnson Space Center. “Right now it’s social media. We’ve had our accounts for several years now [Facebook: International Space Station (4 million followers); Twitter: @Space_ Station (3 million followers); Instagram: www. nasa.gov/instagram; Snapchat: www.snapchat. com/add/NASA]. And we share the science that goes on aboard the ISS, the upgrades to the space station, details about spacewalks, and mission coverage of spacecraft arriving and departing. We share beautiful imagery and show people around the world a perspective they would never ordinarily get to see. So, it’s really a great platform to build awareness about how we are working on the ISS to benefit everyone on Earth.” To Cheshier, “public engagement is so much easier when we have social media. I think it’s the most direct way to talk to the public.” She added, “When media was just television, radio, and newspapers, you didn’t really get that other side, the two-way communications that give people the opportunity to say what they love, or even share what they love with other people.” While the space station does not have its own YouTube account, it did provide the setting for Canadian astronaut Chris Hadfield’s 2013 YouTube rendition of David Bowie’s “Space Oddity,” which became an overnight sensation with more than 47 million views and counting (www.youtube.com/ watch?v=KaOC9danxNo). In a video describing his musical tribute, Hadfield said, “NASA is tens of thousands of people. I think that overall, they saw that it allowed people to see spaceflight for what it really is. It’s people exploring the rest of the universe, living in an environment we have never been in before. We are up there just experiencing things like anybody else is. We are taking the culture we were raised with to a new place and adapting it. And that, I think, is a healthy and natural thing to do. And so, NASA, to a large degree, really loved it. And there are all sorts of stuff NASA is doing now using

social media, using YouTube, using technology onboard to try to help people understand spaceflight even better.” Hadfield also noted that, during his first space shuttle flight (STS-74, 1995), “there were no digital cameras, so every picture was film. There was no internet. And in fact, real-time communications with the vehicle was just radio. It is really difficult to share a magnificent experience just by radio … Imagine if Michelangelo were lying on his back painting the Sistine Chapel and he had a web cam next to him, and you could ask him questions. We had no idea what Michelangelo was thinking. We only see the result. I think seeing and understanding the process and the human side of it is a really important part of the creation of new things and the exploration of new places.”

CELEBRATING OUR DIVERSITY A key factor in the space station truly being the people’s space station is that its crews represent something special that is relatable to all people: They look more like us. The early years of space exploration were almost exclusively a white male endeavor. While there is still work to be done in diversifying