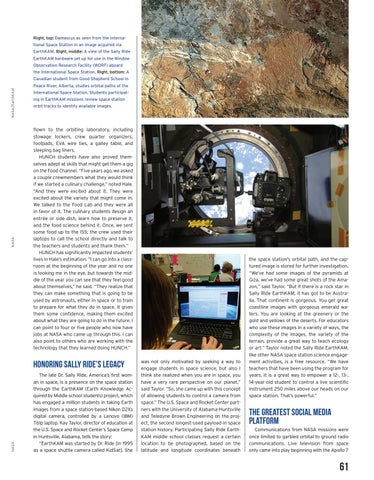 flown to the orbiting laboratory, including stowage lockers, crew quarter organizers, footpads, EVA wire ties, a galley table, and sleeping bag liners. HUNCH students have also proved themselves adept at skills that might get them a gig on the Food Channel. “Five years ago, we asked a couple crewmembers what they would think if we started a culinary challenge,” noted Hale. “And they were excited about it. They were excited about the variety that might come in. We talked to the Food Lab and they were all in favor of it. The culinary students design an entrée or side dish, learn how to preserve it, and the food science behind it. Once, we sent some food up to the ISS; the crew used their laptops to call the school directly and talk to the teachers and students and thank them.” HUNCH has significantly impacted students’ lives in Hale’s estimation. “I can go into a classroom at the beginning of the year and no one is looking me in the eye, but towards the middle of the year you can see that they feel good about themselves,” he said. “They realize that they can make something that is going to be used by astronauts, either in space or to train to prepare for what they do in space. It gives them some confidence, making them excited about what they are going to do in the future. I can point to four or five people who now have jobs at NASA who came up through this. I can also point to others who are working with the technology that they learned doing HUNCH.”

HONORING SALLY RIDE’S LEGACY The late Dr. Sally Ride, America’s first woman in space, is a presence on the space station through the EarthKAM (Earth Knowledge Acquired by Middle school students) project, which has engaged a million students in taking Earth images from a space station-based Nikon D2Xs digital camera, controlled by a Lenovo (IBM) T61p laptop. Kay Taylor, director of education at the U.S. Space and Rocket Center’s Space Camp in Huntsville, Alabama, tells the story: “EarthKAM was started by Dr. Ride [in 1995 as a space shuttle camera called KidSat]. She

was not only motivated by seeking a way to engage students in space science, but also I think she realized when you are in space, you have a very rare perspective on our planet,” said Taylor. “So, she came up with this concept of allowing students to control a camera from space.” The U.S. Space and Rocket Center partners with the University of Alabama-Huntsville and Teledyne Brown Engineering on the project, the second longest-used payload in space station history. Participating Sally Ride EarthKAM middle school classes request a certain location to be photographed, based on the latitude and longitude coordinates beneath

the space station’s orbital path, and the captured image is stored for further investigation. “We’ve had some images of the pyramids at Giza, we’ve had some great shots of the Amazon,” said Taylor. “But if there is a rock star in Sally Ride EarthKAM, it has got to be Australia. That continent is gorgeous. You get great coastline images with gorgeous emerald waters. You are looking at the greenery or the gold and yellows of the deserts. For educators who use these images in a variety of ways, the complexity of the images, the variety of the terrain, provide a great way to teach ecology or art.” Taylor noted the Sally Ride EarthKAM, like other NASA space station science engagement activities, is a free resource. “We have teachers that have been using the program for years. It is a great way to empower a 12-, 13-, 14-year-old student to control a live scientific instrument 250 miles above our heads on our space station. That’s powerful.”

THE GREATEST SOCIAL MEDIA PLATFORM Communications from NASA missions were once limited to garbled orbital to ground radio communications. Live television from space only came into play beginning with the Apollo 7