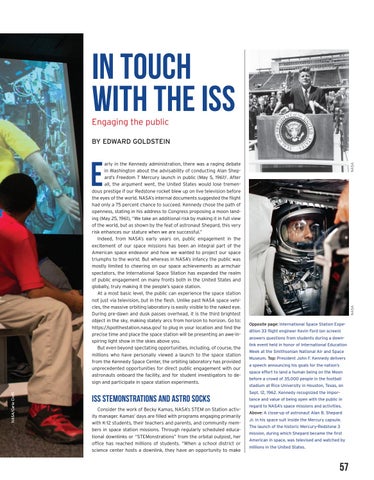 In Touch with the ISS

ISS STEMONSTRATIONS AND ASTRO SOCKS Consider the work of Becky Kamas, NASA’s STEM on Station activity manager. Kamas’ days are filled with programs engaging primarily with K-12 students, their teachers and parents, and community members in space station missions. Through regularly scheduled educational downlinks or “STEMonstrations” from the orbital outpost, her office has reached millions of students. “When a school district or science center hosts a downlink, they have an opportunity to make

arly in the Kennedy administration, there was a raging debate in Washington about the advisability of conducting Alan Shepard’s Freedom 7 Mercury launch in public (May 5, 1961)1. After all, the argument went, the United States would lose tremendous prestige if our Redstone rocket blew up on live television before the eyes of the world. NASA’s internal documents suggested the flight had only a 75 percent chance to succeed. Kennedy chose the path of openness, stating in his address to Congress proposing a moon landing (May 25, 1961), “We take an additional risk by making it in full view of the world, but as shown by the feat of astronaut Shepard, this very risk enhances our stature when we are successful.” Indeed, from NASA’s early years on, public engagement in the excitement of our space missions has been an integral part of the American space endeavor and how we wanted to project our space triumphs to the world. But whereas in NASA’s infancy the public was mostly limited to cheering on our space achievements as armchair spectators, the International Space Station has expanded the realm of public engagement on many fronts both in the United States and globally, truly making it the people’s space station. At a most basic level, the public can experience the space station not just via television, but in the flesh. Unlike past NASA space vehicles, the massive orbiting laboratory is easily visible to the naked eye. During pre-dawn and dusk passes overhead, it is the third brightest object in the sky, making stately arcs from horizon to horizon. Go to: https://spotthestation.nasa.gov/ to plug in your location and find the precise time and place the space station will be presenting an awe-inspiring light show in the skies above you. But even beyond spectating opportunities, including, of course, the millions who have personally viewed a launch to the space station from the Kennedy Space Center, the orbiting laboratory has provided unprecedented opportunities for direct public engagement with our astronauts onboard the facility, and for student investigators to design and participate in space station experiments.

Opposite page: International Space Station Expedition 33 flight engineer Kevin Ford (on screen) answers questions from students during a downlink event held in honor of International Education Week at the Smithsonian National Air and Space Museum. Top: President John F. Kennedy delivers a speech announcing his goals for the nation’s space effort to land a human being on the Moon before a crowd of 35,000 people in the football stadium at Rice University in Houston, Texas, on Sept. 12, 1962. Kennedy recognized the importance and value of being open with the public in regard to NASA’s space missions and activities. Above: A close-up of astronaut Alan B. Shepard Jr. in his space suit inside the Mercury capsule. The launch of the historic Mercury-Redstone 3 mission, during which Shepard became the first American in space, was televised and watched by millions in the United States.