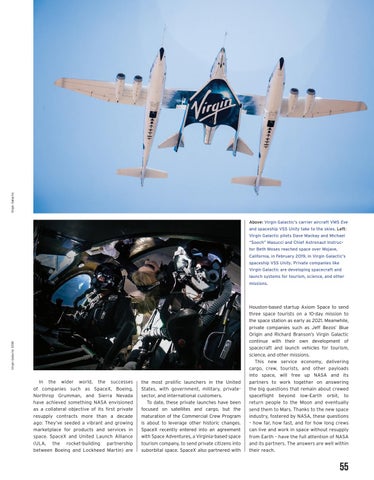 In the wider world, the successes of companies such as SpaceX, Boeing, Northrop Grumman, and Sierra Nevada have achieved something NASA envisioned as a collateral objective of its first private resupply contracts more than a decade ago: They’ve seeded a vibrant and growing marketplace for products and services in space. SpaceX and United Launch Alliance (ULA, the rocket-building partnership between Boeing and Lockheed Martin) are

the most prolific launchers in the United States, with government, military, privatesector, and international customers. To date, these private launches have been focused on satellites and cargo, but the maturation of the Commercial Crew Program is about to leverage other historic changes. SpaceX recently entered into an agreement with Space Adventures, a Virginia-based space tourism company, to send private citizens into suborbital space. SpaceX also partnered with

Houston-based startup Axiom Space to send three space tourists on a 10-day mission to the space station as early as 2021. Meanwhile, private companies such as Jeff Bezos’ Blue Origin and Richard Branson’s Virgin Galactic continue with their own development of spacecraft and launch vehicles for tourism, science, and other missions. This new service economy, delivering cargo, crew, tourists, and other payloads into space, will free up NASA and its partners to work together on answering the big questions that remain about crewed spaceflight beyond low-Earth orbit, to return people to the Moon and eventually send them to Mars. Thanks to the new space industry, fostered by NASA, these questions – how far, how fast, and for how long crews can live and work in space without resupply from Earth – have the full attention of NASA and its partners. The answers are well within their reach.