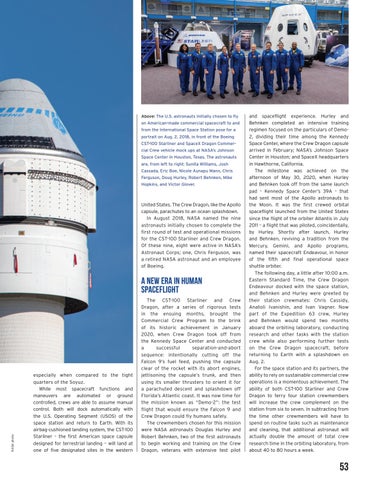 United States. The Crew Dragon, like the Apollo capsule, parachutes to an ocean splashdown. In August 2018, NASA named the nine astronauts initially chosen to complete the first round of test and operational missions for the CST-100 Starliner and Crew Dragon. Of these nine, eight were active in NASA’s Astronaut Corps; one, Chris Ferguson, was a retired NASA astronaut and an employee of Boeing.

A NEW ERA IN HUMAN SPACEFLIGHT

especially when compared to the tight quarters of the Soyuz. While most spacecraft functions and maneuvers are automated or ground controlled, crews are able to assume manual control. Both will dock automatically with the U.S. Operating Segment (USOS) of the space station and return to Earth. With its airbag-cushioned landing system, the CST-100 Starliner – the first American space capsule designed for terrestrial landing – will land at one of five designated sites in the western

The CST-100 Starliner and Crew Dragon, after a series of rigorous tests in the ensuing months, brought the Commercial Crew Program to the brink of its historic achievement in January 2020, when Crew Dragon took off from the Kennedy Space Center and conducted a successful separation-and-abort sequence: intentionally cutting off the Falcon 9’s fuel feed, pushing the capsule clear of the rocket with its abort engines, jettisoning the capsule’s trunk, and then using its smaller thrusters to orient it for a parachuted descent and splashdown off Florida’s Atlantic coast. It was now time for the mission known as “Demo-2”: the test flight that would ensure the Falcon 9 and Crew Dragon could fly humans safely. The crewmembers chosen for this mission were NASA astronauts Douglas Hurley and Robert Behnken, two of the first astronauts to begin working and training on the Crew Dragon, veterans with extensive test pilot

and spaceflight experience. Hurley and Behnken completed an intensive training regimen focused on the particulars of Demo2, dividing their time among the Kennedy Space Center, where the Crew Dragon capsule arrived in February; NASA’s Johnson Space Center in Houston; and SpaceX headquarters in Hawthorne, California. The milestone was achieved on the afternoon of May 30, 2020, when Hurley and Behnken took off from the same launch pad – Kennedy Space Center’s 39A – that had sent most of the Apollo astronauts to the Moon. It was the first crewed orbital spaceflight launched from the United States since the flight of the orbiter Atlantis in July 2011 – a flight that was piloted, coincidentally, by Hurley. Shortly after launch, Hurley and Behnken, reviving a tradition from the Mercury, Gemini, and Apollo programs, named their spacecraft Endeavour, in honor of the fifth and final operational space shuttle orbiter. The following day, a little after 10:00 a.m. Eastern Standard Time, the Crew Dragon Endeavour docked with the space station, and Behnken and Hurley were greeted by their station crewmates: Chris Cassidy, Anatoli Ivanishin, and Ivan Vagner. Now part of the Expedition 63 crew, Hurley and Behnken would spend two months aboard the orbiting laboratory, conducting research and other tasks with the station crew while also performing further tests on the Crew Dragon spacecraft, before returning to Earth with a splashdown on Aug. 2. For the space station and its partners, the ability to rely on sustainable commercial crew operations is a momentous achievement. The ability of both CST-100 Starliner and Crew Dragon to ferry four station crewmembers will increase the crew complement on the station from six to seven. In subtracting from the time other crewmembers will have to spend on routine tasks such as maintenance and cleaning, that additional astronaut will actually double the amount of total crew research time in the orbiting laboratory, from about 40 to 80 hours a week.