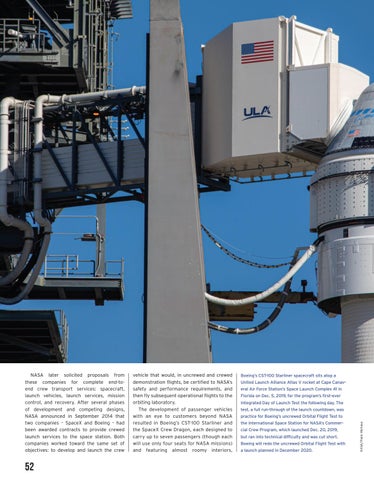 NASA later solicited proposals from these companies for complete end-toend crew transport services: spacecraft, launch vehicles, launch services, mission control, and recovery. After several phases of development and competing designs, NASA announced in September 2014 that two companies – SpaceX and Boeing – had been awarded contracts to provide crewed launch services to the space station. Both companies worked toward the same set of objectives: to develop and launch the crew

vehicle that would, in uncrewed and crewed demonstration flights, be certified to NASA’s safety and performance requirements, and then fly subsequent operational flights to the orbiting laboratory. The development of passenger vehicles with an eye to customers beyond NASA resulted in Boeing’s CST-100 Starliner and the SpaceX Crew Dragon, each designed to carry up to seven passengers (though each will use only four seats for NASA missions) and featuring almost roomy interiors,

Boeing’s CST-100 Starliner spacecraft sits atop a United Launch Alliance Atlas V rocket at Cape Canaveral Air Force Station’s Space Launch Complex 41 in Florida on Dec. 5, 2019, for the program’s first-ever Integrated Day of Launch Test the following day. The test, a full run-through of the launch countdown, was practice for Boeing’s uncrewed Orbital Flight Test to the International Space Station for NASA’s Commercial Crew Program, which launched Dec. 20, 2019, but ran into technical difficulty and was cut short. Boeing will redo the uncrewed Orbital Flight Test with a launch planned in December 2020.