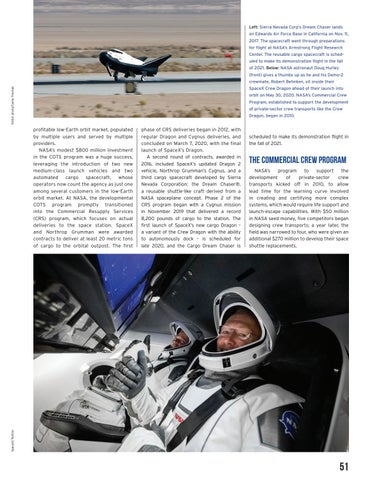 Left: Sierra Nevada Corp’s Dream Chaser lands on Edwards Air Force Base in California on Nov. 11, 2017. The spacecraft went through preparations for flight at NASA’s Armstrong Flight Research Center. The reusable cargo spacecraft is scheduled to make its demonstration flight in the fall of 2021. Below: NASA astronaut Doug Hurley (front) gives a thumbs up as he and his Demo-2 crewmate, Robert Behnken, sit inside their NASA photo/Carla Thomas

SpaceX Crew Dragon ahead of their launch into orbit on May 30, 2020. NASA’s Commercial Crew Program, established to support the development of private-sector crew transports like the Crew Dragon, began in 2010.

phase of CRS deliveries began in 2012, with regular Dragon and Cygnus deliveries, and concluded on March 7, 2020, with the final launch of SpaceX’s Dragon. A second round of contracts, awarded in 2016, included SpaceX’s updated Dragon 2 vehicle, Northrop Grumman’s Cygnus, and a third cargo spacecraft developed by Sierra Nevada Corporation: the Dream Chaser®, a reusable shuttle-like craft derived from a NASA spaceplane concept. Phase 2 of the CRS program began with a Cygnus mission in November 2019 that delivered a record 8,200 pounds of cargo to the station. The first launch of SpaceX’s new cargo Dragon – a variant of the Crew Dragon with the ability to autonomously dock – is scheduled for late 2020, and the Cargo Dream Chaser is

scheduled to make its demonstration flight in the fall of 2021.

THE COMMERCIAL CREW PROGRAM NASA’s program to support the development of private-sector crew transports kicked off in 2010, to allow lead time for the learning curve involved in creating and certifying more complex systems, which would require life support and launch-escape capabilities. With $50 million in NASA seed money, five competitors began designing crew transports; a year later, the field was narrowed to four, who were given an additional $270 million to develop their space shuttle replacements.

profitable low-Earth orbit market, populated by multiple users and served by multiple providers. NASA’s modest $800 million investment in the COTS program was a huge success, leveraging the introduction of two new medium-class launch vehicles and two automated cargo spacecraft, whose operators now count the agency as just one among several customers in the low-Earth orbit market. At NASA, the developmental COTS program promptly transitioned into the Commercial Resupply Services (CRS) program, which focuses on actual deliveries to the space station. SpaceX and Northrop Grumman were awarded contracts to deliver at least 20 metric tons of cargo to the orbital outpost. The first