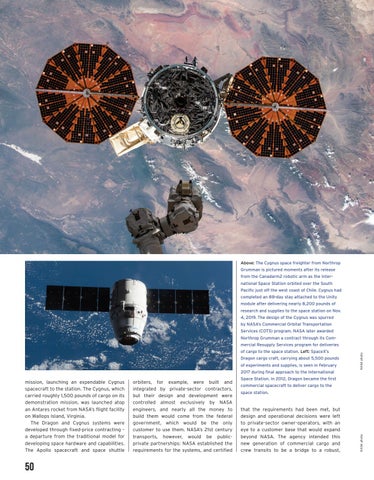 Above: The Cygnus space freighter from Northrop Grumman is pictured moments after its release from the Canadarm2 robotic arm as the International Space Station orbited over the South Pacific just off the west coast of Chile. Cygnus had completed an 88-day stay attached to the Unity module after delivering nearly 8,200 pounds of research and supplies to the space station on Nov. 4, 2019. The design of the Cygnus was spurred by NASA’s Commercial Orbital Transportation Services (COTS) program. NASA later awarded Northrop Grumman a contract through its Comof cargo to the space station. Left: SpaceX’s Dragon cargo craft, carrying about 5,500 pounds of experiments and supplies, is seen in February 2017 during final approach to the International

orbiters, for example, were built and integrated by private-sector contractors, but their design and development were controlled almost exclusively by NASA engineers, and nearly all the money to build them would come from the federal government, which would be the only customer to use them. NASA’s 21st century transports, however, would be publicprivate partnerships: NASA established the requirements for the systems, and certified

Space Station. In 2012, Dragon became the first commercial spacecraft to deliver cargo to the space station.

that the requirements had been met, but design and operational decisions were left to private-sector owner-operators, with an eye to a customer base that would expand beyond NASA. The agency intended this new generation of commercial cargo and crew transits to be a bridge to a robust,

mission, launching an expendable Cygnus spacecraft to the station. The Cygnus, which carried roughly 1,500 pounds of cargo on its demonstration mission, was launched atop an Antares rocket from NASA’s flight facility on Wallops Island, Virginia. The Dragon and Cygnus systems were developed through fixed-price contracting – a departure from the traditional model for developing space hardware and capabilities. The Apollo spacecraft and space shuttle