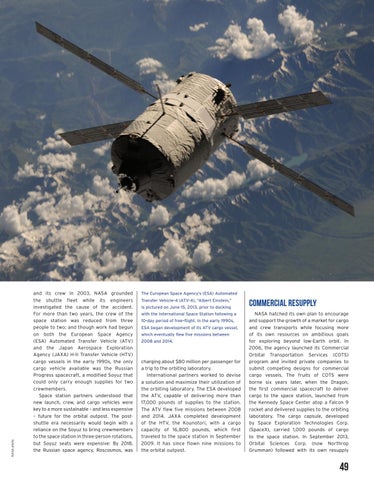 and its crew in 2003, NASA grounded the shuttle fleet while its engineers investigated the cause of the accident. For more than two years, the crew of the space station was reduced from three people to two; and though work had begun on both the European Space Agency (ESA) Automated Transfer Vehicle (ATV) and the Japan Aerospace Exploration Agency (JAXA) H-II Transfer Vehicle (HTV) cargo vessels in the early 1990s, the only cargo vehicle available was the Russian Progress spacecraft, a modified Soyuz that could only carry enough supplies for two crewmembers. Space station partners understood that new launch, crew, and cargo vehicles were key to a more sustainable – and less expensive – future for the orbital outpost. The postshuttle era necessarily would begin with a reliance on the Soyuz to bring crewmembers to the space station in three-person rotations, but Soyuz seats were expensive: By 2018, the Russian space agency, Roscosmos, was

The European Space Agency’s (ESA) Automated Transfer Vehicle-4 (ATV-4), “Albert Einstein,” is pictured on June 15, 2013, prior to docking with the International Space Station following a 10-day period of free-flight. In the early 1990s, ESA began development of its ATV cargo vessel, which eventually flew five missions between 2008 and 2014.

charging about $80 million per passenger for a trip to the orbiting laboratory. International partners worked to devise a solution and maximize their utilization of the orbiting laboratory. The ESA developed the ATV, capable of delivering more than 17,000 pounds of supplies to the station. The ATV flew five missions between 2008 and 2014. JAXA completed development of the HTV, the Kounotori, with a cargo capacity of 16,800 pounds, which first traveled to the space station in September 2009. It has since flown nine missions to the orbital outpost.

COMMERCIAL RESUPPLY NASA hatched its own plan to encourage and support the growth of a market for cargo and crew transports while focusing more of its own resources on ambitious goals for exploring beyond low-Earth orbit. In 2006, the agency launched its Commercial Orbital Transportation Services (COTS) program and invited private companies to submit competing designs for commercial cargo vessels. The fruits of COTS were borne six years later, when the Dragon, the first commercial spacecraft to deliver cargo to the space station, launched from the Kennedy Space Center atop a Falcon 9 rocket and delivered supplies to the orbiting laboratory. The cargo capsule, developed by Space Exploration Technologies Corp. (SpaceX), carried 1,000 pounds of cargo to the space station. In September 2013, Orbital Sciences Corp. (now Northrop Grumman) followed with its own resupply