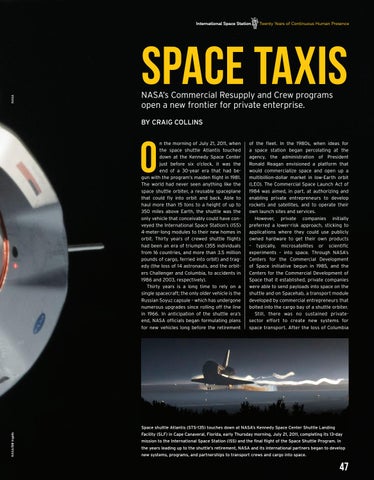 n the morning of July 21, 2011, when the space shuttle Atlantis touched down at the Kennedy Space Center just before six o’clock, it was the end of a 30-year era that had begun with the program’s maiden flight in 1981. The world had never seen anything like the space shuttle orbiter, a reusable spaceplane that could fly into orbit and back. Able to haul more than 15 tons to a height of up to 350 miles above Earth, the shuttle was the only vehicle that conceivably could have conveyed the International Space Station’s (ISS) 4-meter-long modules to their new homes in orbit. Thirty years of crewed shuttle flights had been an era of triumph (355 individuals from 16 countries, and more than 3.5 million pounds of cargo, ferried into orbit) and tragedy (the loss of 14 astronauts, and the orbiters Challenger and Columbia, to accidents in 1986 and 2003, respectively). Thirty years is a long time to rely on a single spacecraft; the only older vehicle is the Russian Soyuz capsule – which has undergone numerous upgrades since rolling off the line in 1966. In anticipation of the shuttle era’s end, NASA officials began formulating plans for new vehicles long before the retirement

of the fleet. In the 1980s, when ideas for a space station began percolating at the agency, the administration of President Ronald Reagan envisioned a platform that would commercialize space and open up a multibillion-dollar market in low-Earth orbit (LEO). The Commercial Space Launch Act of 1984 was aimed, in part, at authorizing and enabling private entrepreneurs to develop rockets and satellites, and to operate their own launch sites and services. However, private companies initially preferred a lower-risk approach, sticking to applications where they could use publicly owned hardware to get their own products – typically, microsatellites or scientific experiments – into space. Through NASA’s Centers for the Commercial Development of Space initiative begun in 1985, and the Centers for the Commercial Development of Space that it established, private companies were able to send payloads into space on the shuttle and on Spacehab, a transport module developed by commercial entrepreneurs that bolted into the cargo bay of a shuttle orbiter. Still, there was no sustained privatesector effort to create new systems for space transport. After the loss of Columbia

Space shuttle Atlantis (STS-135) touches down at NASA’s Kennedy Space Center Shuttle Landing Facility (SLF) in Cape Canaveral, Florida, early Thursday morning, July 21, 2011, completing its 13-day mission to the International Space Station (ISS) and the final flight of the Space Shuttle Program. In the years leading up to the shuttle’s retirement, NASA and its international partners began to develop new systems, programs, and partnerships to transport crews and cargo into space.