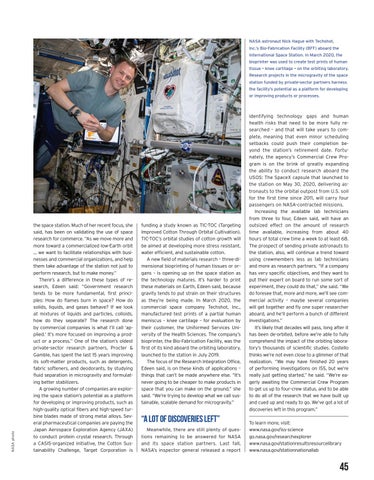 NASA astronaut Nick Hague with Techshot, Inc.’s Bio-Fabrication Facility (BFF) aboard the International Space Station. In March 2020, the bioprinter was used to create test prints of human tissue – knee cartilage – on the orbiting laboratory. Research projects in the microgravity of the space station funded by private-sector partners harness the facility’s potential as a platform for developing

or improving products or processes.

the space station. Much of her recent focus, she said, has been on validating the use of space research for commerce. “As we move more and more toward a commercialized low-Earth orbit ... we want to facilitate relationships with businesses and commercial organizations, and help them take advantage of the station not just to perform research, but to make money.” There’s a difference in these types of research, Edeen said: “Government research tends to be more fundamental, first principles: How do flames burn in space? How do solids, liquids, and gases behave? If we look at mixtures of liquids and particles, colloids, how do they separate? The research done by commercial companies is what I’ll call ‘applied.’ It’s more focused on improving a product or a process.” One of the station’s oldest private-sector research partners, Procter &amp; Gamble, has spent the last 15 years improving its soft-matter products, such as detergents, fabric softeners, and deodorants, by studying fluid separation in microgravity and formulating better stabilizers. A growing number of companies are exploring the space station’s potential as a platform for developing or improving products, such as high-quality optical fibers and high-speed turbine blades made of strong metal alloys. Several pharmaceutical companies are paying the Japan Aerospace Exploration Agency (JAXA) to conduct protein crystal research. Through a CASIS-organized initiative, the Cotton Sustainability Challenge, Target Corporation is

funding a study known as TIC-TOC (Targeting Improved Cotton Through Orbital Cultivation). TIC-TOC’s orbital studies of cotton growth will be aimed at developing more stress resistant, water efficient, and sustainable cotton. A new field of materials research – three-dimensional bioprinting of human tissues or organs – is opening up on the space station as the technology matures. It’s harder to print these materials on Earth, Edeen said, because gravity tends to put strain on their structures as they’re being made. In March 2020, the commercial space company Techshot, Inc., manufactured test prints of a partial human meniscus – knee cartilage – for evaluation by their customer, the Uniformed Services University of the Health Sciences. The company’s bioprinter, the Bio-Fabrication Facility, was the first of its kind aboard the orbiting laboratory, launched to the station in July 2019. The focus of the Research Integration Office, Edeen said, is on these kinds of applications – things that can’t be made anywhere else. “It’s never going to be cheaper to make products in space that you can make on the ground,” she said. “We’re trying to develop what we call sustainable, scalable demand for microgravity.”

“A LOT OF DISCOVERIES LEFT” Meanwhile, there are still plenty of questions remaining to be answered for NASA and its space station partners. Last fall, NASA’s inspector general released a report

identifying technology gaps and human health risks that need to be more fully researched – and that will take years to complete, meaning that even minor scheduling setbacks could push their completion beyond the station’s retirement date. Fortunately, the agency’s Commercial Crew Program is on the brink of greatly expanding the ability to conduct research aboard the USOS: The SpaceX capsule that launched to the station on May 30, 2020, delivering astronauts to the orbital outpost from U.S. soil for the first time since 2011, will carry four passengers on NASA-contracted missions. Increasing the available lab technicians from three to four, Edeen said, will have an outsized effect on the amount of research time available, increasing from about 40 hours of total crew time a week to at least 68. The prospect of sending private astronauts to the station, also, will continue a trend toward using crewmembers less as lab technicians and more as research partners. “If a company has very specific objectives, and they want to put their expert on board to run some sort of experiment, they could do that,” she said. “We do foresee that, more and more, we’ll see commercial activity – maybe several companies will get together and fly one super researcher aboard, and he’ll perform a bunch of different investigations.” It’s likely that decades will pass, long after it has been de-orbited, before we’re able to fully comprehend the impact of the orbiting laboratory’s thousands of scientific studies. Costello thinks we’re not even close to a glimmer of that realization. “We may have finished 20 years of performing investigations on ISS, but we’re really just getting started,” he said. “We’re eagerly awaiting the Commercial Crew Program to get us up to four-crew status, and to be able to do all of the research that we have built up and cued up and ready to go. We’ve got a lot of discoveries left in this program.” To learn more, visit: www.nasa.gov/iss-science go.nasa.gov/researchexplorer www.nasa.gov/stationresultsresourcelibrary www.nasa.gov/stationnationallab