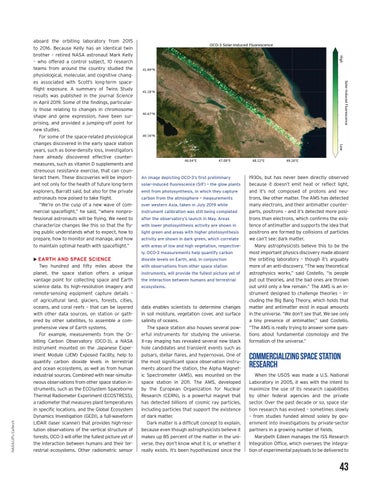 aboard the orbiting laboratory from 2015 to 2016. Because Kelly has an identical twin brother – retired NASA astronaut Mark Kelly – who offered a control subject, 10 research teams from around the country studied the physiological, molecular, and cognitive changes associated with Scott’s long-term spaceflight exposure. A summary of Twins Study results was published in the journal Science in April 2019. Some of the findings, particularly those relating to changes in chromosome shape and gene expression, have been surprising, and provided a jumping-off point for new studies. For some of the space-related physiological changes discovered in the early space station years, such as bone-density loss, investigators have already discovered effective countermeasures, such as vitamin D supplements and strenuous resistance exercise, that can counteract them. These discoveries will be important not only for the health of future long-term explorers, Barratt said, but also for the private astronauts now poised to take flight. “We’re on the cusp of a new wave of commercial spaceflight,” he said, “where nonprofessional astronauts will be flying. We need to characterize changes like this so that the flying public understands what to expect, how to prepare, how to monitor and manage, and how to maintain optimal health with spaceflight.”

An image depicting OCO-3’s first preliminary solar-induced fluorescence (SIF) – the glow plants emit from photosynthesis, in which they capture carbon from the atmosphere – measurements over western Asia, taken in July 2019 while instrument calibration was still being completed after the observatory’s launch in May. Areas with lower photosynthesis activity are shown in light green and areas with higher photosynthesis activity are shown in dark green, which correlate with areas of low and high vegetation, respective-

dioxide levels on Earth, and, in conjunction

Two hundred and fifty miles above the planet, the space station offers a unique vantage point for collecting space and Earth science data. Its high-resolution imagery and remote-sensing equipment capture details – of agricultural land, glaciers, forests, cities, oceans, and coral reefs – that can be layered with other data sources, on station or gathered by other satellites, to assemble a comprehensive view of Earth systems. For example, measurements from the Orbiting Carbon Observatory (OCO-3), a NASA instrument mounted on the Japanese Experiment Module (JEM) Exposed Facility, help to quantify carbon dioxide levels in terrestrial and ocean ecosystems, as well as from human industrial sources. Combined with near-simultaneous observations from other space station instruments, such as the ECOsystem Spaceborne Thermal Radiometer Experiment (ECOSTRESS), a radiometer that measures plant temperatures in specific locations, and the Global Ecosystem Dynamics Investigation (GEDI), a full-waveform LIDAR (laser scanner) that provides high-resolution observations of the vertical structure of forests, OCO-3 will offer the fullest picture yet of the interaction between humans and their terrestrial ecosystems. Other radiometric sensor

with observations from other space station instruments, will provide the fullest picture yet of the interaction between humans and terrestrial ecosystems.

data enables scientists to determine changes in soil moisture, vegetation cover, and surface salinity of oceans. The space station also houses several powerful instruments for studying the universe. X-ray imaging has revealed several new black hole candidates and transient events such as pulsars, stellar flares, and hypernovas. One of the most significant space observation instruments aboard the station, the Alpha Magnetic Spectrometer (AMS), was mounted on the space station in 2011. The AMS, developed by the European Organization for Nuclear Research (CERN), is a powerful magnet that has detected billions of cosmic ray particles, including particles that support the existence of dark matter. Dark matter is a difficult concept to explain, because even though astrophysicists believe it makes up 85 percent of the matter in the universe, they don’t know what it is, or whether it really exists. It’s been hypothesized since the

1930s, but has never been directly observed because it doesn’t emit heat or reflect light, and it’s not composed of protons and neutrons, like other matter. The AMS has detected many electrons, and their antimatter counterparts, positrons – and it’s detected more positrons than electrons, which confirms the existence of antimatter and supports the idea that positrons are formed by collisions of particles we can’t see: dark matter. Many astrophysicists believe this to be the most important physics discovery made aboard the orbiting laboratory – though it’s arguably more of an anti-discovery. “The way theoretical astrophysics works,” said Costello, “is people put out theories, and the bad ones are thrown out until only a few remain.” The AMS is an instrument designed to challenge theories – including the Big Bang Theory, which holds that matter and antimatter exist in equal amounts in the universe. “We don’t see that. We see only a tiny presence of antimatter,” said Costello. “The AMS is really trying to answer some questions about fundamental cosmology and the formation of the universe.”

COMMERCIALIZING SPACE STATION RESEARCH When the USOS was made a U.S. National Laboratory in 2005, it was with the intent to maximize the use of its research capabilities by other federal agencies and the private sector. Over the past decade or so, space station research has evolved – sometimes slowly – from studies funded almost solely by government into investigations by private-sector partners in a growing number of fields. Marybeth Edeen manages the ISS Research Integration Office, which oversees the integration of experimental payloads to be delivered to