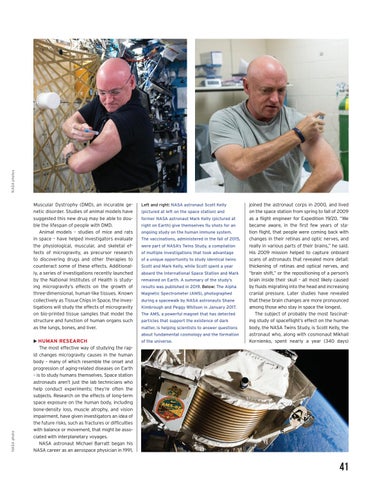 Muscular Dystrophy (DMD), an incurable genetic disorder. Studies of animal models have suggested this new drug may be able to double the lifespan of people with DMD. Animal models – studies of mice and rats in space – have helped investigators evaluate the physiological, muscular, and skeletal effects of microgravity, as precursor research to discovering drugs and other therapies to counteract some of these effects. Additionally, a series of investigations recently launched by the National Institutes of Health is studying microgravity’s effects on the growth of three-dimensional, human-like tissues. Known collectively as Tissue Chips in Space, the investigations will study the effects of microgravity on bio-printed tissue samples that model the structure and function of human organs such as the lungs, bones, and liver.

Left and right: NASA astronaut Scott Kelly (pictured at left on the space station) and former NASA astronaut Mark Kelly (pictured at right on Earth) give themselves flu shots for an ongoing study on the human immune system. The vaccinations, administered in the fall of 2015, were part of NASA’s Twins Study, a compilation of multiple investigations that took advantage of a unique opportunity to study identical twins Scott and Mark Kelly, while Scott spent a year aboard the International Space Station and Mark remained on Earth. A summary of the study’s results was published in 2019. Below: The Alpha Magnetic Spectrometer (AMS), photographed during a spacewalk by NASA astronauts Shane Kimbrough and Peggy Whitson in January 2017. The AMS, a powerful magnet that has detected particles that support the existence of dark matter, is helping scientists to answer questions about fundamental cosmology and the formation

joined the astronaut corps in 2000, and lived on the space station from spring to fall of 2009 as a flight engineer for Expedition 19/20. “We became aware, in the first few years of station flight, that people were coming back with changes in their retinas and optic nerves, and really in various parts of their brains,” he said. His 2009 mission helped to capture onboard scans of astronauts that revealed more detail: thickening of retinas and optical nerves, and “brain shift,” or the repositioning of a person’s brain inside their skull – all most likely caused by fluids migrating into the head and increasing cranial pressure. Later studies have revealed that these brain changes are more pronounced among those who stay in space the longest. The subject of probably the most fascinating study of spaceflight’s effect on the human body, the NASA Twins Study, is Scott Kelly, the astronaut who, along with cosmonaut Mikhail Kornienko, spent nearly a year (340 days)

The most effective way of studying the rapid changes microgravity causes in the human body – many of which resemble the onset and progression of aging-related diseases on Earth – is to study humans themselves. Space station astronauts aren’t just the lab technicians who help conduct experiments; they’re often the subjects. Research on the effects of long-term space exposure on the human body, including bone-density loss, muscle atrophy, and vision impairment, have given investigators an idea of the future risks, such as fractures or difficulties with balance or movement, that might be associated with interplanetary voyages. NASA astronaut Michael Barratt began his NASA career as an aerospace physician in 1991,