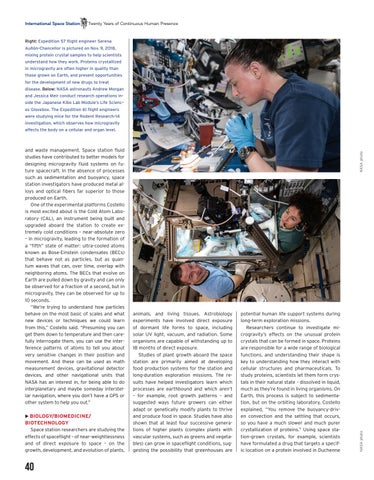 Right: Expedition 57 flight engineer Serena Auñón-Chancellor is pictured on Nov. 9, 2018, mixing protein crystal samples to help scientists understand how they work. Proteins crystallized in microgravity are often higher in quality than those grown on Earth, and present opportunities for the development of new drugs to treat disease. Below: NASA astronauts Andrew Morgan and Jessica Meir conduct research operations inside the Japanese Kibo Lab Module’s Life Sciences Glovebox. The Expedition 61 flight engineers were studying mice for the Rodent Research-14 investigation, which observes how microgravity

u BIOLOGY/BIOMEDICINE/ BIOTECHNOLOGY Space station researchers are studying the effects of spaceflight – of near-weightlessness and of direct exposure to space – on the growth, development, and evolution of plants,

animals, and living tissues. Astrobiology experiments have involved direct exposure of dormant life forms to space, including solar UV light, vacuum, and radiation. Some organisms are capable of withstanding up to 18 months of direct exposure. Studies of plant growth aboard the space station are primarily aimed at developing food production systems for the station and long-duration exploration missions. The results have helped investigators learn which processes are earthbound and which aren’t – for example, root growth patterns – and suggested ways future growers can either adapt or genetically modify plants to thrive and produce food in space. Studies have also shown that at least four successive generations of higher plants (complex plants with vascular systems, such as greens and vegetables) can grow in spaceflight conditions, suggesting the possibility that greenhouses are

potential human life support systems during long-term exploration missions. Researchers continue to investigate microgravity’s effects on the unusual protein crystals that can be formed in space. Proteins are responsible for a wide range of biological functions, and understanding their shape is key to understanding how they interact with cellular structures and pharmaceuticals. To study proteins, scientists let them form crystals in their natural state – dissolved in liquid, much as they’re found in living organisms. On Earth, this process is subject to sedimentation, but on the orbiting laboratory, Costello explained, “You remove the buoyancy-driven convection and the settling that occurs, so you have a much slower and much purer crystallization of proteins.” Using space station-grown crystals, for example, scientists have formulated a drug that targets a specific location on a protein involved in Duchenne

and waste management. Space station fluid studies have contributed to better models for designing microgravity fluid systems on future spacecraft. In the absence of processes such as sedimentation and buoyancy, space station investigators have produced metal alloys and optical fibers far superior to those produced on Earth. One of the experimental platforms Costello is most excited about is the Cold Atom Laboratory (CAL), an instrument being built and upgraded aboard the station to create extremely cold conditions – near-absolute zero – in microgravity, leading to the formation of a “fifth” state of matter: ultra-cooled atoms known as Bose-Einstein condensates (BECs) that behave not as particles, but as quantum waves that can, over time, overlap with neighboring atoms. The BECs that evolve on Earth are pulled down by gravity and can only be observed for a fraction of a second, but in microgravity, they can be observed for up to 10 seconds. “We’re trying to understand how particles behave on the most basic of scales and what new devices or techniques we could learn from this,” Costello said. “Presuming you can get them down to temperature and then carefully interrogate them, you can use the interference patterns of atoms to tell you about very sensitive changes in their position and movement. And these can be used as math measurement devices, gravitational detector devices, and other navigational units that NASA has an interest in, for being able to do interplanetary and maybe someday interstellar navigation, where you don’t have a GPS or other system to help you out.”

affects the body on a cellular and organ level.