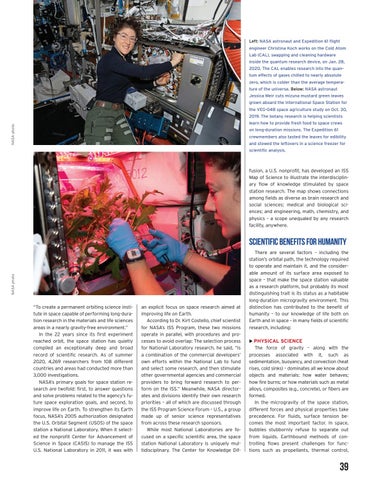 Left: NASA astronaut and Expedition 61 flight engineer Christina Koch works on the Cold Atom Lab (CAL), swapping and cleaning hardware inside the quantum research device, on Jan. 28, 2020. The CAL enables research into the quantum effects of gases chilled to nearly absolute zero, which is colder than the average temperature of the universe. Below: NASA astronaut Jessica Meir cuts mizuna mustard green leaves grown aboard the International Space Station for the VEG-04B space agriculture study on Oct. 30, 2019. The botany research is helping scientists NASA photo

learn how to provide fresh food to space crews on long-duration missions. The Expedition 61 crewmembers also tasted the leaves for edibility and stowed the leftovers in a science freezer for scientific analysis.

fusion, a U.S. nonprofit, has developed an ISS Map of Science to illustrate the interdisciplinary flow of knowledge stimulated by space station research. The map shows connections among fields as diverse as brain research and social sciences; medical and biological sciences; and engineering, math, chemistry, and physics – a scope unequaled by any research facility, anywhere.

“To create a permanent orbiting science institute in space capable of performing long-duration research in the materials and life sciences areas in a nearly gravity-free environment.” In the 22 years since its first experiment reached orbit, the space station has quietly compiled an exceptionally deep and broad record of scientific research. As of summer 2020, 4,269 researchers from 108 different countries and areas had conducted more than 3,000 investigations. NASA’s primary goals for space station research are twofold: first, to answer questions and solve problems related to the agency’s future space exploration goals, and second, to improve life on Earth. To strengthen its Earth focus, NASA’s 2005 authorization designated the U.S. Orbital Segment (USOS) of the space station a National Laboratory. When it selected the nonprofit Center for Advancement of Science in Space (CASIS) to manage the ISS U.S. National Laboratory in 2011, it was with

an explicit focus on space research aimed at improving life on Earth. According to Dr. Kirt Costello, chief scientist for NASA’s ISS Program, these two missions operate in parallel, with procedures and processes to avoid overlap: The selection process for National Laboratory research, he said, “is a combination of the commercial developers’ own efforts within the National Lab to fund and select some research, and then stimulate other governmental agencies and commercial providers to bring forward research to perform on the ISS.” Meanwhile, NASA directorates and divisions identify their own research priorities – all of which are discussed through the ISS Program Science Forum – U.S., a group made up of senior science representatives from across these research sponsors. While most National Laboratories are focused on a specific scientific area, the space station National Laboratory is uniquely multidisciplinary. The Center for Knowledge Dif-

There are several factors – including the station’s orbital path, the technology required to operate and maintain it, and the considerable amount of its surface area exposed to space – that make the space station valuable as a research platform, but probably its most distinguishing trait is its status as a habitable long-duration microgravity environment. This distinction has contributed to the benefit of humanity – to our knowledge of life both on Earth and in space – in many fields of scientific research, including: u PHYSICAL SCIENCE

The force of gravity – along with the processes associated with it, such as sedimentation, buoyancy, and convection (heat rises, cold sinks) – dominates all we know about objects and materials: how water behaves; how fire burns; or how materials such as metal alloys, composites (e.g., concrete), or fibers are formed. In the microgravity of the space station, different forces and physical properties take precedence. For fluids, surface tension becomes the most important factor. In space, bubbles stubbornly refuse to separate out from liquids. Earthbound methods of controlling flows present challenges for functions such as propellants, thermal control,