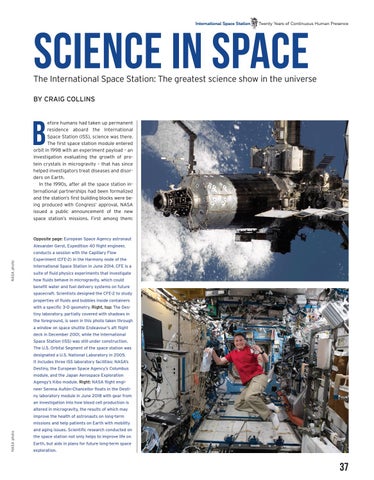 The International Space Station: The greatest science show in the universe BY CRAIG COLLINS

efore humans had taken up permanent residence aboard the International Space Station (ISS), science was there. The first space station module entered orbit in 1998 with an experiment payload – an investigation evaluating the growth of protein crystals in microgravity – that has since helped investigators treat diseases and disorders on Earth. In the 1990s, after all the space station international partnerships had been formalized and the station’s first building blocks were being produced with Congress’ approval, NASA issued a public announcement of the new space station’s missions. First among them:

conducts a session with the Capillary Flow Experiment (CFE-2) in the Harmony node of the International Space Station in June 2014. CFE is a suite of fluid physics experiments that investigate how fluids behave in microgravity, which could benefit water and fuel delivery systems on future spacecraft. Scientists designed the CFE-2 to study properties of fluids and bubbles inside containers with a specific 3-D geometry. Right, top: The Destiny laboratory, partially covered with shadows in the foreground, is seen in this photo taken through a window on space shuttle Endeavour’s aft flight deck in December 2001, while the International Space Station (ISS) was still under construction. The U.S. Orbital Segment of the space station was designated a U.S. National Laboratory in 2005. It includes three ISS laboratory facilities: NASA’s Destiny, the European Space Agency’s Columbus module, and the Japan Aerospace Exploration Agengy’s Kibo module. Right: NASA flight engineer Serena Auñón-Chancellor floats in the Destiny laboratory module in June 2018 with gear from an investigation into how blood cell production is altered in microgravity, the results of which may improve the health of astronauts on long-term

missions and help patients on Earth with mobility and aging issues. Scientific research conducted on the space station not only helps to improve life on Earth, but aids in plans for future long-term space exploration.