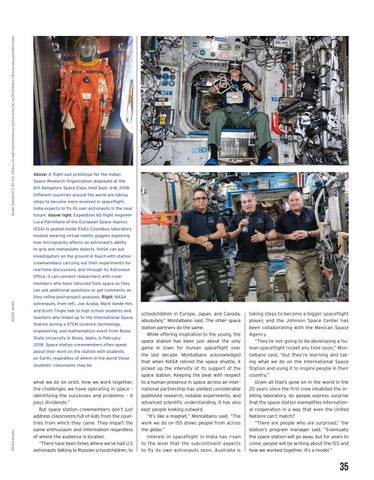 Above: A flight suit prototype for the Indian Space Research Organization displayed at the 6th Bangalore Space Expo, held Sept. 6-8, 2018. Different countries around the world are taking steps to become more involved in spaceflight; India expects to fly its own astronauts in the near future. Above right: Expedition 60 flight engineer Luca Parmitano of the European Space Agency (ESA) is seated inside ESA’s Columbus laboratory module wearing virtual reality goggles exploring how microgravity affects an astronaut’s ability to grip and manipulate objects. NASA can put investigators on the ground in touch with station crewmembers carrying out their experiments for real-time discussions, and through its Astronaut Office, it can connect researchers with crewmembers who have returned from space so they can ask additional questions or get comments as

they refine post-project analyses. Right: NASA astronauts, from left, Joe Acaba, Mark Vande Hei, and Scott Tingle talk to high school students and teachers who linked up to the International Space Station during a STEM (science, technology, engineering, and mathematics) event from Boise State University in Boise, Idaho, in February 2018. Space station crewmembers often speak about their work on the station with students on Earth, regardless of where in the world those

students’ classrooms may be.

what we do on orbit, how we work together, the challenges we have operating in space – identifying the successes and problems – it pays dividends.” But space station crewmembers don’t just address classrooms full of kids from the countries from which they came. They impart the same enthusiasm and information regardless of where the audience is located. “There have been times where we’ve had U.S astronauts talking to Russian schoolchildren, to

schoolchildren in Europe, Japan, and Canada, absolutely,” Montalbano said. The other space station partners do the same. While offering inspiration to the young, the space station has been just about the only game in town for human spaceflight over the last decade. Montalbano acknowledged that when NASA retired the space shuttle, it picked up the intensity of its support of the space station. Keeping the beat with respect to a human presence in space across an international partnership has yielded considerable published research, notable experiments, and advanced scientific understanding. It has also kept people looking outward. “It’s like a magnet,” Montalbano said. “The work we do on ISS draws people from across the globe.” Interest in spaceflight in India has risen to the level that the subcontinent expects to fly its own astronauts soon. Australia is

taking steps to become a bigger spaceflight player, and the Johnson Space Center has been collaborating with the Mexican Space Agency. “They’re not going to be developing a human spaceflight rocket any time soon,” Montalbano said, “but they’re learning and taking what we do on the International Space Station and using it to inspire people in their country.” Given all that’s gone on in the world in the 20 years since the first crew inhabited the orbiting laboratory, do people express surprise that the space station exemplifies international cooperation in a way that even the United Nations can’t match? “There are people who are surprised,” the station’s program manager said. “Eventually the space station will go away, but for years to come, people will be writing about the ISS and how we worked together. It’s a model.”