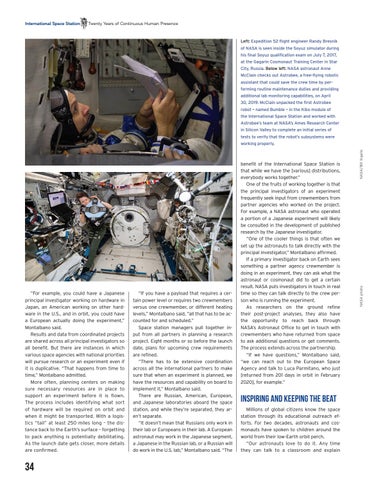 Left: Expedition 52 flight engineer Randy Bresnik of NASA is seen inside the Soyuz simulator during his final Soyuz qualification exam on July 7, 2017, at the Gagarin Cosmonaut Training Center in Star City, Russia. Below left: NASA astronaut Anne McClain checks out Astrobee, a free-flying robotic assistant that could save the crew time by performing routine maintenance duties and providing additional lab monitoring capabilities, on April 30, 2019. McClain unpacked the first Astrobee robot – named Bumble – in the Kibo module of the International Space Station and worked with Astrobee’s team at NASA’s Ames Research Center in Silicon Valley to complete an initial series of tests to verify that the robot’s subsystems were

“If you have a payload that requires a certain power level or requires two crewmembers versus one crewmember, or different heating levels,” Montalbano said, “all that has to be accounted for and scheduled.” Space station managers pull together input from all partners in planning a research project. Eight months or so before the launch date, plans for upcoming crew requirements are refined. “There has to be extensive coordination across all the international partners to make sure that when an experiment is planned, we have the resources and capability on board to implement it,” Montalbano said. There are Russian, American, European, and Japanese laboratories aboard the space station, and while they’re separated, they aren’t separate. “It doesn’t mean that Russians only work in their lab or Europeans in their lab. A European astronaut may work in the Japanese segment, a Japanese in the Russian lab, or a Russian will do work in the U.S. lab,” Montalbano said. “The

INSPIRING AND KEEPING THE BEAT Millions of global citizens know the space station through its educational outreach efforts. For two decades, astronauts and cosmonauts have spoken to children around the world from their low-Earth orbit perch. “Our astronauts love to do it. Any time they can talk to a classroom and explain

“For example, you could have a Japanese principal investigator working on hardware in Japan, an American working on other hardware in the U.S., and in orbit, you could have a European actually doing the experiment,” Montalbano said. Results and data from coordinated projects are shared across all principal investigators so all benefit. But there are instances in which various space agencies with national priorities will pursue research or an experiment even if it is duplicative. “That happens from time to time,” Montalbano admitted. More often, planning centers on making sure necessary resources are in place to support an experiment before it is flown. The process includes identifying what sort of hardware will be required on orbit and when it might be transported. With a logistics “tail” at least 250 miles long – the distance back to the Earth’s surface – forgetting to pack anything is potentially debilitating. As the launch date gets closer, more details are confirmed.

benefit of the International Space Station is that while we have the [various] distributions, everybody works together.” One of the fruits of working together is that the principal investigators of an experiment frequently seek input from crewmembers from partner agencies who worked on the project. For example, a NASA astronaut who operated a portion of a Japanese experiment will likely be consulted in the development of published research by the Japanese investigator. “One of the cooler things is that often we set up the astronauts to talk directly with the principal investigator,” Montalbano affirmed. If a primary investigator back on Earth sees something a partner agency crewmember is doing in an experiment, they can ask what the astronaut or cosmonaut did to get a certain result. NASA puts investigators in touch in real time so they can talk directly to the crew person who is running the experiment. As researchers on the ground refine their post-project analyses, they also have the opportunity to reach back through NASA’s Astronaut Office to get in touch with crewmembers who have returned from space to ask additional questions or get comments. The process extends across the partnership. “If we have questions,” Montalbano said, “we can reach out to the European Space Agency and talk to Luca Parmitano, who just [returned from 201 days in orbit in February 2020], for example.”