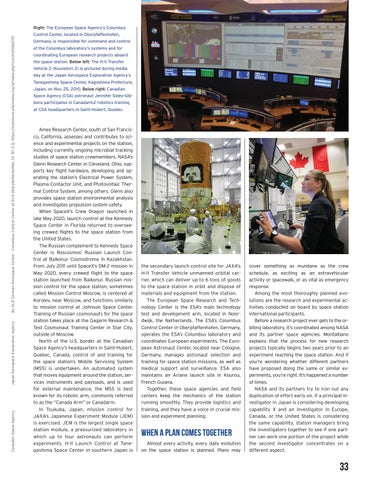 Ames Research Center, south of San Francisco, California, assesses and contributes to science and experimental projects on the station, including currently ongoing microbial tracking studies of space station crewmembers. NASA’s Glenn Research Center in Cleveland, Ohio, supports key flight hardware, developing and operating the station’s Electrical Power System, Plasma Contactor Unit, and Photovoltaic Thermal Control System, among others. Glenn also provides space station environmental analysis and investigates propulsion system safety. When SpaceX’s Crew Dragon launched in late May 2020, launch control at the Kennedy Space Center in Florida returned to overseeing crewed flights to the space station from the United States. The Russian complement to Kennedy Space Center is Roscosmos’ Russian Launch Control at Baikonur Cosmodrome in Kazakhstan. From July 2011 until SpaceX’s DM-2 mission in May 2020, every crewed flight to the space station launched from Baikonur. Russian mission control for the space station, sometimes called Mission Control Moscow, is centered at Korolev, near Moscow, and functions similarly to mission control at Johnson Space Center. Training of Russian cosmonauts for the space station takes place at the Gagarin Research &amp; Test Cosmonaut Training Center in Star City, outside of Moscow. North of the U.S. border at the Canadian Space Agency’s headquarters in Saint-Hubert, Quebec, Canada, control of and training for the space station’s Mobile Servicing System (MSS) is undertaken. An automated system that moves equipment around the station, services instruments and payloads, and is used for external maintenance, the MSS is best known for its robotic arm, commonly referred to as the “Canada Arm” or Canadarm. In Tsukuba, Japan, mission control for JAXA’s Japanese Experiment Module (JEM) is exercised. JEM is the largest single space station module, a pressurized laboratory in which up to four astronauts can perform experiments. H-II Launch Control at Tanegashima Space Center in southern Japan is

the secondary launch control site for JAXA’s H-II Transfer Vehicle unmanned orbital carrier, which can deliver up to 6 tons of goods to the space station in orbit and dispose of materials and equipment from the station. The European Space Research and Technology Center is the ESA’s main technology test and development arm, located in Noordwijk, the Netherlands. The ESA’s Columbus Control Center in Oberpfaffenhofen, Germany, operates the ESA’s Columbus laboratory and coordinates European experiments. The European Astronaut Center, located near Cologne, Germany, manages astronaut selection and training for space station missions, as well as medical support and surveillance. ESA also maintains an Ariane launch site in Kourou, French Guiana. Together, these space agencies and field centers keep the mechanics of the station running smoothly. They provide logistics and training, and they have a voice in crucial mission and experiment planning.

WHEN A PLAN COMES TOGETHER Almost every activity, every daily evolution on the space station is planned. Plans may

cover something as mundane as the crew schedule, as exciting as an extravehicular activity or spacewalk, or as vital as emergency response. Among the most thoroughly planned evolutions are the research and experimental activities conducted on board by space station international participants. Before a research project ever gets to the orbiting laboratory, it’s coordinated among NASA and its partner space agencies. Montalbano explains that the process for new research projects typically begins two years prior to an experiment reaching the space station. And if you’re wondering whether different partners have proposed doing the same or similar experiments, you’re right. It’s happened a number of times. NASA and its partners try to iron out any duplication of effort early on. If a principal investigator in Japan is considering developing capability X and an investigator in Europe, Canada, or the United States is considering the same capability, station managers bring the investigators together to see if one partner can work one portion of the project while the second investigator concentrates on a different aspect.