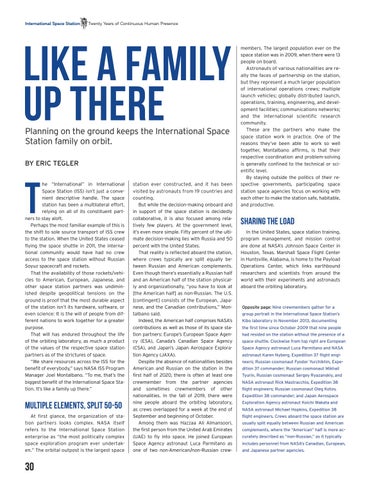 Like a Family Up There Planning on the ground keeps the International Space Station family on orbit.

he “International” in International Space Station (ISS) isn’t just a convenient descriptive handle. The space station has been a multilateral effort, relying on all of its constituent partners to stay aloft. Perhaps the most familiar example of this is the shift to sole source transport of ISS crew to the station. When the United States ceased flying the space shuttle in 2011, the international community would have had no crew access to the space station without Russian Soyuz spacecraft and rockets. That the availability of those rockets/vehicles to American, European, Japanese, and other space station partners was undiminished despite geopolitical tensions on the ground is proof that the most durable aspect of the station isn’t its hardware, software, or even science: It is the will of people from different nations to work together for a greater purpose. That will has endured throughout the life of the orbiting laboratory, as much a product of the values of the respective space station partners as of the strictures of space. “We share resources across the ISS for the benefit of everybody,” says NASA ISS Program Manager Joel Montalbano. “To me, that’s the biggest benefit of the International Space Station. It’s like a family up there.”

MULTIPLE ELEMENTS, SPLIT 50-50 At first glance, the organization of station partners looks complex. NASA itself refers to the International Space Station enterprise as “the most politically complex space exploration program ever undertaken.” The orbital outpost is the largest space

station ever constructed, and it has been visited by astronauts from 19 countries and counting. But while the decision-making onboard and in support of the space station is decidedly collaborative, it is also focused among relatively few players. At the government level, it’s even more simple. Fifty percent of the ultimate decision-making lies with Russia and 50 percent with the United States. That reality is reflected aboard the station, where crews typically are split equally between Russian and American complements. Even though there’s essentially a Russian half and an American half of the station physically and organizationally, “you have to look at [the American half] as non-Russian. The U.S. [contingent] consists of the European, Japanese, and the Canadian contributions,” Montalbano said. Indeed, the American half comprises NASA’s contributions as well as those of its space station partners: Europe’s European Space Agency (ESA), Canada’s Canadian Space Agency (CSA), and Japan’s Japan Aerospace Exploration Agency (JAXA). Despite the absence of nationalities besides American and Russian on the station in the first half of 2020, there is often at least one crewmember from the partner agencies and sometimes crewmembers of other nationalities. In the fall of 2019, there were nine people aboard the orbiting laboratory, as crews overlapped for a week at the end of September and beginning of October. Among them was Hazzaa Ali Almansoori, the first person from the United Arab Emirates (UAE) to fly into space. He joined European Space Agency astronaut Luca Parmitano as one of two non-American/non-Russian crew-

members. The largest population ever on the space station was in 2009, when there were 13 people on board. Astronauts of various nationalities are really the faces of partnership on the station, but they represent a much larger population of international operations crews; multiple launch vehicles; globally distributed launch, operations, training, engineering, and development facilities; communications networks; and the international scientific research community. These are the partners who make the space station work in practice. One of the reasons they’ve been able to work so well together, Montalbano affirms, is that their respective coordination and problem-solving is generally confined to the technical or scientific level. By staying outside the politics of their respective governments, participating space station space agencies focus on working with each other to make the station safe, habitable, and productive.

SHARING THE LOAD In the United States, space station training, program management, and mission control are done at NASA’s Johnson Space Center in Houston, Texas. Marshall Space Flight Center in Huntsville, Alabama, is home to the Payload Operations Center, which links earthbound researchers and scientists from around the world with their experiments and astronauts aboard the orbiting laboratory.