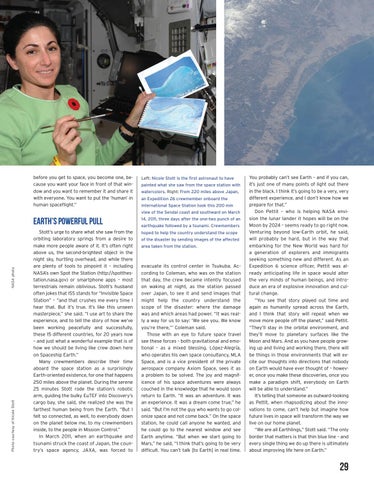 before you get to space, you become one, because you want your face in front of that window and you want to remember it and share it with everyone. You want to put the ‘human’ in human spaceflight.”

Left: Nicole Stott is the first astronaut to have painted what she saw from the space station with watercolors. Right: From 220 miles above Japan, an Expedition 26 crewmember onboard the International Space Station took this 200 mm

view of the Sendai coast and southward on March

Stott’s urge to share what she saw from the orbiting laboratory springs from a desire to make more people aware of it. It’s often right above us, the second-brightest object in the night sky, hurtling overhead, and while there are plenty of tools to pinpoint it – including NASA’s own Spot the Station (http://spotthestation.nasa.gov) or smartphone apps – most terrestrials remain oblivious. Stott’s husband often jokes that ISS stands for “Invisible Space Station” – “and that crushes me every time I hear that. But it’s true. It’s like this unseen masterpiece,” she said. “I use art to share the experience, and to tell the story of how we’ve been working peacefully and successfully, these 15 different countries, for 20 years now – and just what a wonderful example that is of how we should be living like crew down here on Spaceship Earth.” Many crewmembers describe their time aboard the space station as a surprisingly Earth-oriented existence, for one that happens 250 miles above the planet. During the serene 25 minutes Stott rode the station’s robotic arm, guiding the bulky EuTEF into Discovery’s cargo bay, she said, she realized she was the farthest human being from the Earth. “But I felt so connected, as well, to everybody down on the planet below me, to my crewmembers inside, to the people in Mission Control.” In March 2011, when an earthquake and tsunami struck the coast of Japan, the country’s space agency, JAXA, was forced to

hoped to help the country understand the scope

earthquake followed by a tsunami. Crewmembers of the disaster by sending images of the affected area taken from the station.

evacuate its control center in Tsukuba. According to Coleman, who was on the station that day, the crew became intently focused on waking at night, as the station passed over Japan, to see it and send images that might help the country understand the scope of the disaster: where the damage was and which areas had power. “It was really a way for us to say: ‘We see you. We know you’re there,’” Coleman said. Those with an eye to future space travel see these forces – both gravitational and emotional – as a mixed blessing. López-Alegría, who operates his own space consultancy, MLA Space, and is a vice president of the private aerospace company Axiom Space, sees it as a problem to be solved. The joy and magnificence of his space adventures were always couched in the knowledge that he would soon return to Earth. “It was an adventure. It was an experience. It was a dream come true,” he said. “But I’m not the guy who wants to go colonize space and not come back.” On the space station, he could call anyone he wanted, and he could go to the nearest window and see Earth anytime. “But when we start going to Mars,” he said, “I think that’s going to be very difficult. You can’t talk [to Earth] in real time.

You probably can’t see Earth – and if you can, it’s just one of many points of light out there in the black. I think it’s going to be a very, very different experience, and I don’t know how we prepare for that.” Don Pettit – who is helping NASA envision the lunar lander it hopes will be on the Moon by 2024 – seems ready to go right now. Venturing beyond low-Earth orbit, he said, will probably be hard, but in the way that embarking for the New World was hard for a generation of explorers and immigrants seeking something new and different. As an Expedition 6 science officer, Pettit was already anticipating life in space would alter the very minds of human beings, and introduce an era of explosive innovation and cultural change. “You see that story played out time and again as humanity spread across the Earth, and I think that story will repeat when we move more people off the planet,” said Pettit. “They’ll stay in the orbital environment, and they’ll move to planetary surfaces like the Moon and Mars. And as you have people growing up and living and working there, there will be things in those environments that will excite our thoughts into directions that nobody on Earth would have ever thought of – however, once you make these discoveries, once you make a paradigm shift, everybody on Earth will be able to understand.” It’s telling that someone as outward-looking as Pettit, when rhapsodizing about the innovations to come, can’t help but imagine how future lives in space will transform the way we live on our home planet. “We are all Earthlings,” Stott said. “The only border that matters is that thin blue line – and every single thing we do up there is ultimately about improving life here on Earth.”