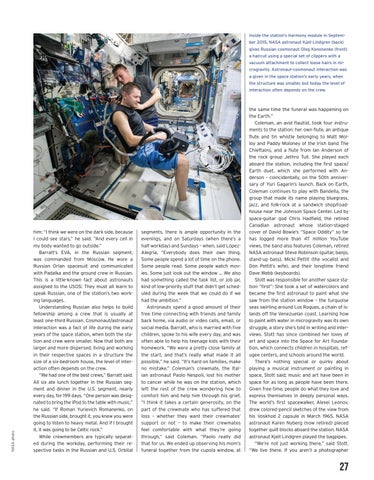 Inside the station’s Harmony module in September 2015, NASA astronaut Kjell Lindgren (back) gives Russian cosmonaut Oleg Kononenko (front) a haircut using a special set of clippers with a vacuum attachment to collect loose hairs in microgravity. Astronaut-cosmonaut interaction was a given in the space station’s early years, when the structure was smaller, but today the level of

interaction often depends on the crew.

him: “I think we were on the dark side, because I could see stars,” he said. “And every cell in my body wanted to go outside.” Barratt’s EVA, in the Russian segment, was commanded from Moscow. He wore a Russian Orlan spacesuit and communicated with Padalka and the ground crew in Russian. This is a little-known fact about astronauts assigned to the USOS: They must all learn to speak Russian, one of the station’s two working languages. Understanding Russian also helps to build fellowship among a crew that is usually at least one-third Russian. Cosmonaut/astronaut interaction was a fact of life during the early years of the space station, when both the station and crew were smaller. Now that both are larger and more dispersed, living and working in their respective spaces in a structure the size of a six-bedroom house, the level of interaction often depends on the crew. “We had one of the best crews,” Barratt said. All six ate lunch together in the Russian segment and dinner in the U.S. segment, nearly every day, for 199 days. “One person was designated to bring the iPod to the table with music,” he said. “If Roman Yurievich Romanenko, on the Russian side, brought it, you knew you were going to listen to heavy metal. And if I brought it, it was going to be Celtic rock.” While crewmembers are typically separated during the workday, performing their respective tasks in the Russian and U.S. Orbital

segments, there is ample opportunity in the evenings, and on Saturdays (when there’s a half workday) and Sundays – when, said LópezAlegría, “Everybody does their own thing. Some people spend a lot of time on the phone. Some people read. Some people watch movies. Some just look out the window ... We also had something called the task list, or job jar, kind of low-priority stuff that didn’t get scheduled during the week that we could do if we had the ambition.” Astronauts spend a good amount of their free time connecting with friends and family back home, via audio or video calls, email, or social media. Barratt, who is married with five children, spoke to his wife every day, and was often able to help his teenage kids with their homework. “We were a pretty close family at the start, and that’s really what made it all possible,” he said. “It’s hard on families, make no mistake.” Coleman’s crewmate, the Italian astronaut Paolo Nespoli, lost his mother to cancer while he was on the station, which left the rest of the crew wondering how to comfort him and help him through his grief. “I think it takes a certain generosity, on the part of the crewmate who has suffered that loss – whether they want their crewmates’ support or not – to make their crewmates feel comfortable with what they’re going through,” said Coleman. “Paolo really did that for us. We ended up observing his mom’s funeral together from the cupola window, at

the same time the funeral was happening on the Earth.” Coleman, an avid flautist, took four instruments to the station: her own flute, an antique flute and tin whistle belonging to Matt Molloy and Paddy Moloney of the Irish band The Chieftains, and a flute from Ian Anderson of the rock group Jethro Tull. She played each aboard the station, including the first space/ Earth duet, which she performed with Anderson – coincidentally, on the 50th anniversary of Yuri Gagarin’s launch. Back on Earth, Coleman continues to play with Bandella, the group that made its name playing bluegrass, jazz, and folk-rock at a sandwich shop/roadhouse near the Johnson Space Center. Led by space-guitar god Chris Hadfield, the retired Canadian astronaut whose station-staged cover of David Bowie’s “Space Oddity” so far has logged more than 47 million YouTube views, the band also features Coleman, retired NASA astronaut Steve Robinson (guitar, banjo, stand-up bass), Micki Pettit (the vocalist and Don Pettit’s wife), and their longtime friend Dave Webb (keyboards). Stott was responsible for another space station “first”: She took a set of watercolors and became the first astronaut to paint what she saw from the station window – the turquoise seas swirling around Los Roques, a chain of islands off the Venezuelan coast. Learning how to paint with water in microgravity was its own struggle, a story she’s told in writing and interviews. Stott has since combined her loves of art and space into the Space for Art Foundation, which connects children in hospitals, refugee centers, and schools around the world. There’s nothing special or quirky about playing a musical instrument or painting in space, Stott said; music and art have been in space for as long as people have been there. Given free time, people do what they love and express themselves in deeply personal ways. The world’s first spacewalker, Alexei Leonov, drew colored-pencil sketches of the view from his Voskhod 2 capsule in March 1965. NASA astronaut Karen Nyberg (now retired) pieced together quilt blocks aboard the station. NASA astronaut Kjell Lindgren played the bagpipes. “We’re not just working there,” said Stott. “We live there. If you aren’t a photographer