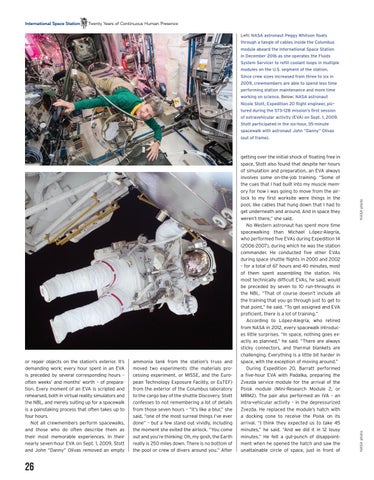 Twenty Years of Continuous Human Presence Left: NASA astronaut Peggy Whitson floats through a tangle of cables inside the Columbus module aboard the International Space Station in December 2016 as she operates the Fluids System Servicer to refill coolant loops in multiple modules on the U.S. segment of the station. Since crew sizes increased from three to six in 2009, crewmembers are able to spend less time performing station maintenance and more time working on science. Below: NASA astronaut Nicole Stott, Expedition 20 flight engineer, pictured during the STS-128 mission’s first session of extravehicular activity (EVA) on Sept. 1, 2009. Stott participated in the six-hour, 35-minute spacewalk with astronaut John “Danny” Olivas

ammonia tank from the station’s truss and moved two experiments (the materials processing experiment, or MISSE, and the European Technology Exposure Facility, or EuTEF) from the exterior of the Columbus laboratory to the cargo bay of the shuttle Discovery. Stott confesses to not remembering a lot of details from those seven hours – “it’s like a blur,” she said, “one of the most surreal things I’ve ever done” – but a few stand out vividly, including the moment she exited the airlock. “You come out and you’re thinking: Oh, my gosh, the Earth really is 250 miles down. There is no bottom of the pool or crew of divers around you.” After

or repair objects on the station’s exterior. It’s demanding work; every hour spent in an EVA is preceded by several corresponding hours – often weeks’ and months’ worth – of preparation. Every moment of an EVA is scripted and rehearsed, both in virtual reality simulators and the NBL, and merely suiting up for a spacewalk is a painstaking process that often takes up to four hours. Not all crewmembers perform spacewalks, and those who do often describe them as their most memorable experiences. In their nearly seven-hour EVA on Sept. 1, 2009, Stott and John “Danny” Olivas removed an empty

getting over the initial shock of floating free in space, Stott also found that despite her hours of simulation and preparation, an EVA always involves some on-the-job training. “Some of the cues that I had built into my muscle memory for how I was going to move from the airlock to my first worksite were things in the pool, like cables that hung down that I had to get underneath and around. And in space they weren’t there,” she said. No Western astronaut has spent more time spacewalking than Michael López-Alegría, who performed five EVAs during Expedition 14 (2006-2007), during which he was the station commander. He conducted five other EVAs during space shuttle flights in 2000 and 2002 – for a total of 67 hours and 40 minutes, most of them spent assembling the station. His most technically difficult EVAs, he said, would be preceded by seven to 10 run-throughs in the NBL. “That of course doesn’t include all the training that you go through just to get to that point,” he said. “To get assigned and EVA proficient, there is a lot of training.” According to López-Alegría, who retired from NASA in 2012, every spacewalk introduces little surprises. “In space, nothing goes exactly as planned,” he said. “There are always sticky connectors, and thermal blankets are challenging. Everything is a little bit harder in space, with the exception of moving around.” During Expedition 20, Barratt performed a five-hour EVA with Padalka, preparing the Zvezda service module for the arrival of the Poisk module (Mini-Research Module 2, or MRM2). The pair also performed an IVA – an intra-vehicular activity – in the depressurized Zvezda. He replaced the module’s hatch with a docking cone to receive the Poisk on its arrival. “I think they expected us to take 45 minutes,” he said. “And we did it in 12 lousy minutes.” He felt a gut-punch of disappointment when he opened the hatch and saw the unattainable circle of space, just in front of