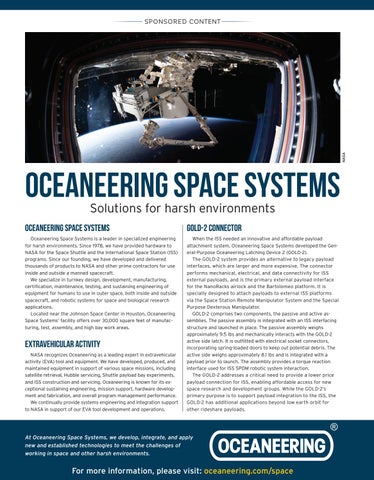 Oceaneering Space Systems is a leader in specialized engineering for harsh environments. Since 1978, we have provided hardware to NASA for the Space Shuttle and the International Space Station (ISS) programs. Since our founding, we have developed and delivered thousands of products to NASA and other prime contractors for use inside and outside a manned spacecraft. We specialize in turnkey design, development, manufacturing, certification, maintenance, testing, and sustaining engineering of equipment for humans to use in outer space, both inside and outside spacecraft, and robotic systems for space and biological research applications. Located near the Johnson Space Center in Houston, Oceaneering Space Systemsâ&amp;#x20AC;&amp;#x2122; facility offers over 30,000 square feet of manufacturing, test, assembly, and high bay work areas.

When the ISS needed an innovative and affordable payload attachment system, Oceaneering Space Systems developed the General-Purpose Oceaneering Latching Device 2 (GOLD-2). The GOLD-2 system provides an alternative to legacy payload interfaces, which are larger and more expensive. The connector performs mechanical, electrical, and data connectivity for ISS external payloads, and is the primary external payload interface for the NanoRacks airlock and the Bartolomeo platform. It is specially designed to attach payloads to external ISS platforms via the Space Station Remote Manipulator System and the Special Purpose Dexterous Manipulator. GOLD-2 comprises two components, the passive and active assemblies. The passive assembly is integrated with an ISS interfacing structure and launched in place. The passive assembly weighs approximately 9.5 lbs and mechanically interacts with the GOLD-2 active side latch. It is outfitted with electrical socket connectors, incorporating spring-loaded doors to keep out potential debris. The active side weighs approximately 8.1 lbs and is integrated with a payload prior to launch. The assembly provides a torque reaction interface used for ISS SPDM robotic system interaction. The GOLD-2 addresses a critical need to provide a lower price payload connection for ISS, enabling affordable access for new space research and development groups. While the GOLD-2â&amp;#x20AC;&amp;#x2122;s primary purpose is to support payload integration to the ISS, the GOLD-2 has additional applications beyond low earth orbit for other rideshare payloads.

At Oceaneering Space Systems, we develop, integrate, and apply new and established technologies to meet the challenges of working in space and other harsh environments.