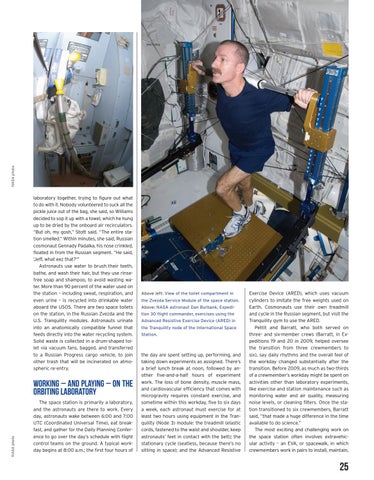 laboratory together, trying to figure out what to do with it. Nobody volunteered to suck all the pickle juice out of the bag, she said, so Williams decided to sop it up with a towel, which he hung up to be dried by the onboard air recirculators. “But oh, my gosh,” Stott said. “The entire station smelled.” Within minutes, she said, Russian cosmonaut Gennady Padalka, his nose crinkled, floated in from the Russian segment. “He said, ‘Jeff, what eez that?’” Astronauts use water to brush their teeth, bathe, and wash their hair, but they use rinsefree soap and shampoo, to avoid wasting water. More than 90 percent of the water used on the station – including sweat, respiration, and even urine – is recycled into drinkable water aboard the USOS. There are two space toilets on the station, in the Russian Zvezda and the U.S. Tranquility modules. Astronauts urinate into an anatomically compatible funnel that feeds directly into the water recycling system. Solid waste is collected in a drum-shaped toilet via vacuum fans, bagged, and transferred to a Russian Progress cargo vehicle, to join other trash that will be incinerated on atmospheric re-entry.

WORKING – AND PLAYING – ON THE ORBITING LABORATORY The space station is primarily a laboratory, and the astronauts are there to work. Every day, astronauts wake between 6:00 and 7:00 UTC (Coordinated Universal Time), eat breakfast, and gather for the Daily Planning Conference to go over the day’s schedule with flight control teams on the ground. A typical workday begins at 8:00 a.m.; the first four hours of

Above left: View of the toilet compartment in the Zvezda Service Module of the space station. Above: NASA astronaut Dan Burbank, Expedition 30 flight commander, exercises using the Advanced Resistive Exercise Device (ARED) in the Tranquility node of the International Space Station.

the day are spent setting up, performing, and taking down experiments as assigned. There’s a brief lunch break at noon, followed by another five-and-a-half hours of experiment work. The loss of bone density, muscle mass, and cardiovascular efficiency that comes with microgravity requires constant exercise, and sometime within this workday, five to six days a week, each astronaut must exercise for at least two hours using equipment in the Tranquility (Node 3) module: the treadmill (elastic cords, fastened to the waist and shoulder, keep astronauts’ feet in contact with the belt); the stationary cycle (seatless, because there’s no sitting in space); and the Advanced Resistive

Exercise Device (ARED), which uses vacuum cylinders to imitate the free weights used on Earth. Cosmonauts use their own treadmill and cycle in the Russian segment, but visit the Tranquility gym to use the ARED. Pettit and Barratt, who both served on three- and six-member crews (Barratt, in Expeditions 19 and 20 in 2009, helped oversee the transition from three crewmembers to six), say daily rhythms and the overall feel of the workday changed substantially after the transition. Before 2009, as much as two-thirds of a crewmember’s workday might be spent on activities other than laboratory experiments, like exercise and station maintenance such as monitoring water and air quality, measuring noise levels, or cleaning filters. Once the station transitioned to six crewmembers, Barratt said, “that made a huge difference in the time available to do science.” The most exciting and challenging work on the space station often involves extravehicular activity – an EVA, or spacewalk, in which crewmembers work in pairs to install, maintain,