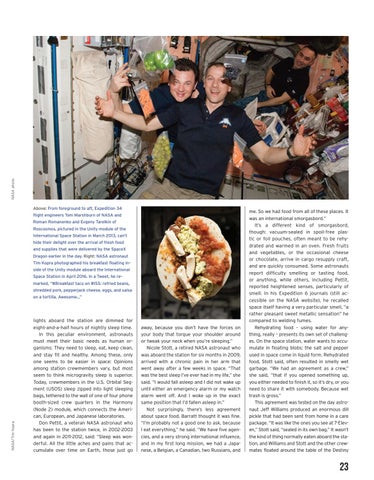 Above: From foreground to aft, Expedition 34 flight engineers Tom Marshburn of NASA and Roman Romanenko and Evgeny Tarelkin of Roscosmos, pictured in the Unity module of the International Space Station in March 2013, can’t hide their delight over the arrival of fresh food and supplies that were delivered by the SpaceX Dragon earlier in the day. Right: NASA astronaut Tim Kopra photographed his breakfast floating inside of the Unity module aboard the International Space Station in April 2016. In a Tweet, he remarked, “#Breakfast taco on #ISS: refried beans, shredded pork, pepperjack cheese, eggs, and salsa

lights aboard the station are dimmed for eight-and-a-half hours of nightly sleep time. In this peculiar environment, astronauts must meet their basic needs as human organisms: They need to sleep, eat, keep clean, and stay fit and healthy. Among these, only one seems to be easier in space: Opinions among station crewmembers vary, but most seem to think microgravity sleep is superior. Today, crewmembers in the U.S. Orbital Segment (USOS) sleep zipped into light sleeping bags, tethered to the wall of one of four phone booth-sized crew quarters in the Harmony (Node 2) module, which connects the American, European, and Japanese laboratories. Don Pettit, a veteran NASA astronaut who has been to the station twice, in 2002-2003 and again in 2011-2012, said: “Sleep was wonderful. All the little aches and pains that accumulate over time on Earth, those just go

away, because you don’t have the forces on your body that torque your shoulder around or tweak your neck when you’re sleeping.” Nicole Stott, a retired NASA astronaut who was aboard the station for six months in 2009, arrived with a chronic pain in her arm that went away after a few weeks in space. “That was the best sleep I’ve ever had in my life,” she said. “I would fall asleep and I did not wake up until either an emergency alarm or my watch alarm went off. And I woke up in the exact same position that I’d fallen asleep in.” Not surprisingly, there’s less agreement about space food. Barratt thought it was fine. “I’m probably not a good one to ask, because I eat everything,” he said. “We have five agencies, and a very strong international influence, and in my first long mission, we had a Japanese, a Belgian, a Canadian, two Russians, and

me. So we had food from all of these places. It was an international smorgasbord.” It’s a different kind of smorgasbord, though: vacuum-sealed in spoil-free plastic or foil pouches, often meant to be rehydrated and warmed in an oven. Fresh fruits and vegetables, or the occasional cheese or chocolate, arrive in cargo resupply craft, and are quickly consumed. Some astronauts report difficulty smelling or tasting food, or anything, while others, including Pettit, reported heightened senses, particularly of smell. In his Expedition 6 journals (still accessible on the NASA website), he recalled space itself having a very particular smell, “a rather pleasant sweet metallic sensation” he compared to welding fumes. Rehydrating food – using water for anything, really – presents its own set of challenges. On the space station, water wants to accumulate in floating blobs; the salt and pepper used in space come in liquid form. Rehydrated food, Stott said, often resulted in smelly wet garbage. “We had an agreement as a crew,” she said, “that if you opened something up, you either needed to finish it, so it’s dry, or you need to share it with somebody. Because wet trash is gross.” This agreement was tested on the day astronaut Jeff Williams produced an enormous dill pickle that had been sent from home in a care package. “It was like the ones you see at 7-Eleven,” Stott said, “sealed in its own bag.” It wasn’t the kind of thing normally eaten aboard the station, and Williams and Stott and the other crewmates floated around the table of the Destiny