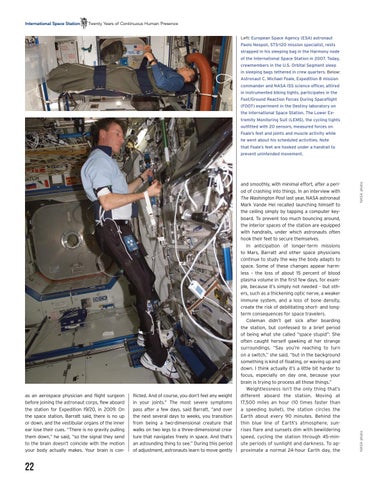 flicted. And of course, you don’t feel any weight in your joints.” The most severe symptoms pass after a few days, said Barratt, “and over the next several days to weeks, you transition from being a two-dimensional creature that walks on two legs to a three-dimensional creature that navigates freely in space. And that’s an astounding thing to see.” During this period of adjustment, astronauts learn to move gently

as an aerospace physician and flight surgeon before joining the astronaut corps, flew aboard the station for Expedition 19/20, in 2009. On the space station, Barratt said, there is no up or down, and the vestibular organs of the inner ear lose their cues. “There is no gravity pulling them down,” he said, “so the signal they send to the brain doesn’t coincide with the motion your body actually makes. Your brain is con-

and smoothly, with minimal effort, after a period of crashing into things. In an interview with The Washington Post last year, NASA astronaut Mark Vande Hei recalled launching himself to the ceiling simply by tapping a computer keyboard. To prevent too much bouncing around, the interior spaces of the station are equipped with handrails, under which astronauts often hook their feet to secure themselves. In anticipation of longer-term missions to Mars, Barratt and other space physicians continue to study the way the body adapts to space. Some of these changes appear harmless – the loss of about 15 percent of blood plasma volume in the first few days, for example, because it’s simply not needed – but others, such as a thickening optic nerve, a weaker immune system, and a loss of bone density, create the risk of debilitating short- and longterm consequences for space travelers. Coleman didn’t get sick after boarding the station, but confessed to a brief period of being what she called “space stupid”: She often caught herself gawking at her strange surroundings. “Say you’re reaching to turn on a switch,” she said, “but in the background something is kind of floating, or waving up and down. I think actually it’s a little bit harder to focus, especially on day one, because your brain is trying to process all those things.” Weightlessness isn’t the only thing that’s different aboard the station. Moving at 17,500 miles an hour (10 times faster than a speeding bullet), the station circles the Earth about every 90 minutes. Behind the thin blue line of Earth’s atmosphere, sunrises flare and sunsets dim with bewildering speed, cycling the station through 45-minute periods of sunlight and darkness. To approximate a normal 24-hour Earth day, the