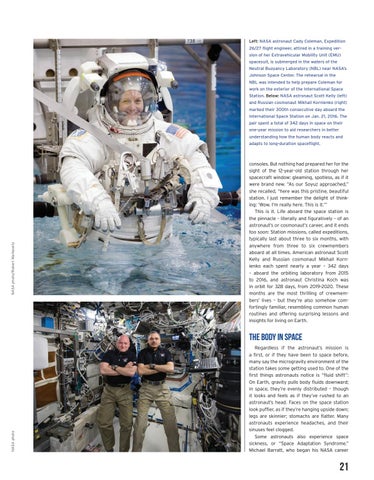 Left: NASA astronaut Cady Coleman, Expedition 26/27 flight engineer, attired in a training version of her Extravehicular Mobility Unit (EMU) spacesuit, is submerged in the waters of the Neutral Buoyancy Laboratory (NBL) near NASA’s Johnson Space Center. The rehearsal in the NBL was intended to help prepare Coleman for work on the exterior of the International Space Station. Below: NASA astronaut Scott Kelly (left) and Russian cosmonaut Mikhail Kornienko (right) marked their 300th consecutive day aboard the International Space Station on Jan. 21, 2016. The pair spent a total of 342 days in space on their one-year mission to aid researchers in better understanding how the human body reacts and

consoles. But nothing had prepared her for the sight of the 12-year-old station through her spacecraft window: gleaming, spotless, as if it were brand new. “As our Soyuz approached,” she recalled, “here was this pristine, beautiful station. I just remember the delight of thinking: ‘Wow. I’m really here. This is it.’” This is it. Life aboard the space station is the pinnacle – literally and figuratively – of an astronaut’s or cosmonaut’s career, and it ends too soon: Station missions, called expeditions, typically last about three to six months, with anywhere from three to six crewmembers aboard at all times. American astronaut Scott Kelly and Russian cosmonaut Mikhail Kornienko each spent nearly a year – 342 days – aboard the orbiting laboratory from 2015 to 2016, and astronaut Christina Koch was in orbit for 328 days, from 2019-2020. These months are the most thrilling of crewmembers’ lives – but they’re also somehow comfortingly familiar, resembling common human routines and offering surprising lessons and insights for living on Earth.

THE BODY IN SPACE Regardless if the astronaut’s mission is a first, or if they have been to space before, many say the microgravity environment of the station takes some getting used to. One of the first things astronauts notice is “fluid shift”: On Earth, gravity pulls body fluids downward; in space, they’re evenly distributed – though it looks and feels as if they’ve rushed to an astronaut’s head. Faces on the space station look puffier, as if they’re hanging upside down; legs are skinnier; stomachs are flatter. Many astronauts experience headaches, and their sinuses feel clogged. Some astronauts also experience space sickness, or “Space Adaptation Syndrome.” Michael Barratt, who began his NASA career