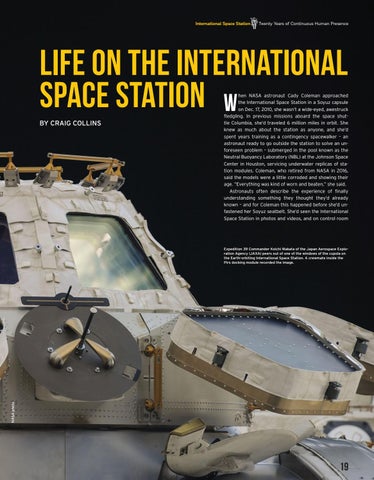 LIFE ON THE INTERNATIONAL SPACE STATION W BY CRAIG COLLINS

hen NASA astronaut Cady Coleman approached the International Space Station in a Soyuz capsule on Dec. 17, 2010, she wasn’t a wide-eyed, awestruck fledgling. In previous missions aboard the space shuttle Columbia, she’d traveled 6 million miles in orbit. She knew as much about the station as anyone, and she’d spent years training as a contingency spacewalker – an astronaut ready to go outside the station to solve an unforeseen problem – submerged in the pool known as the Neutral Buoyancy Laboratory (NBL) at the Johnson Space Center in Houston, servicing underwater replicas of station modules. Coleman, who retired from NASA in 2016, said the models were a little corroded and showing their age. “Everything was kind of worn and beaten,” she said. Astronauts often describe the experience of finally understanding something they thought they’d already known – and for Coleman this happened before she’d unfastened her Soyuz seatbelt. She’d seen the International Space Station in photos and videos, and on control room

Expedition 39 Commander Koichi Wakata of the Japan Aerospace Exploration Agency (JAXA) peers out of one of the windows of the cupola on the Earth-orbiting International Space Station. A crewmate inside the Pirs docking module recorded the image.