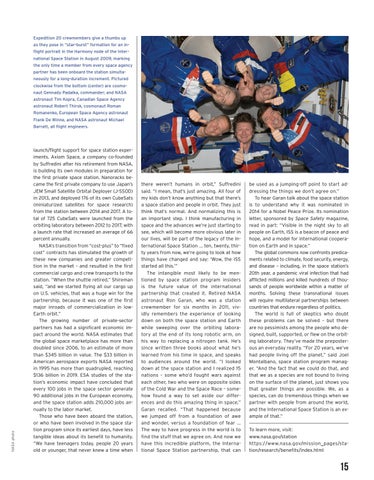 Expedition 20 crewmembers give a thumbs up as they pose in “star-burst” formation for an inflight portrait in the Harmony node of the International Space Station in August 2009, marking the only time a member from every space agency partner has been onboard the station simultaneously for a long-duration increment. Pictured clockwise from the bottom (center) are cosmonaut Gennady Padalka, commander; and NASA astronaut Tim Kopra, Canadian Space Agency astronaut Robert Thirsk, cosmonaut Roman Romanenko, European Space Agency astronaut Frank De Winne, and NASA astronaut Michael

launch/flight support for space station experiments. Axiom Space, a company co-founded by Suffredini after his retirement from NASA, is building its own modules in preparation for the first private space station. Nanoracks became the first private company to use Japan’s JEM Small Satellite Orbital Deployer (J-SSOD) in 2013, and deployed 176 of its own CubeSats (miniaturized satellites for space research) from the station between 2014 and 2017. A total of 725 CubeSats were launched from the orbiting laboratory between 2012 to 2017, with a launch rate that increased an average of 66 percent annually. NASA’s transition from “cost-plus” to “fixed cost” contracts has stimulated the growth of these new companies and greater competition in the market – and resulted in the first commercial cargo and crew transports to the station. “When the shuttle retired,” Shireman said, “and we started flying all our cargo up on U.S. vehicles, that was a huge win for the partnership, because it was one of the first major inroads of commercialization in lowEarth orbit.” The growing number of private-sector partners has had a significant economic impact around the world. NASA estimates that the global space marketplace has more than doubled since 2006, to an estimate of more than $345 billion in value. The $33 billion in American aerospace exports NASA reported in 1995 has more than quadrupled, reaching $136 billion in 2019. ESA studies of the station’s economic impact have concluded that every 100 jobs in the space sector generate 90 additional jobs in the European economy, and the space station adds 210,000 jobs annually to the labor market. Those who have been aboard the station, or who have been involved in the space station program since its earliest days, have less tangible ideas about its benefit to humanity. “We have teenagers today, people 20 years old or younger, that never knew a time when

there weren’t humans in orbit,” Suffredini said. “I mean, that’s just amazing. All four of my kids don’t know anything but that there’s a space station and people in orbit. They just think that’s normal. And normalizing this is an important step. I think manufacturing in space and the advances we’re just starting to see, which will become more obvious later in our lives, will be part of the legacy of the International Space Station ... ten, twenty, thirty years from now, we’re going to look at how things have changed and say: ‘Wow, the ISS started all this.’” The intangible most likely to be mentioned by space station program insiders is the future value of the international partnership that created it. Retired NASA astronaut Ron Garan, who was a station crewmember for six months in 2011, vividly remembers the experience of looking down on both the space station and Earth while sweeping over the orbiting laboratory at the end of its long robotic arm, on his way to replacing a nitrogen tank. He’s since written three books about what he’s learned from his time in space, and speaks to audiences around the world. “I looked down at the space station and I realized 15 nations – some who’d fought wars against each other, two who were on opposite sides of the Cold War and the Space Race – somehow found a way to set aside our differences and do this amazing thing in space,” Garan recalled. “That happened because we jumped off from a foundation of awe and wonder, versus a foundation of fear ... The way to have progress in the world is to find the stuff that we agree on. And now we have this incredible platform, the International Space Station partnership, that can

be used as a jumping-off point to start addressing the things we don’t agree on.” To hear Garan talk about the space station is to understand why it was nominated in 2014 for a Nobel Peace Prize. Its nomination letter, sponsored by Space Safety magazine, read in part: “Visible in the night sky to all people on Earth, ISS is a beacon of peace and hope, and a model for international cooperation on Earth and in space.” The global commons now confronts predicaments related to climate, food security, energy, and disease – including, in the space station’s 20th year, a pandemic viral infection that had afflicted millions and killed hundreds of thousands of people worldwide within a matter of months. Solving these transnational issues will require multilateral partnerships between countries that endure regardless of politics. The world is full of skeptics who doubt these problems can be solved – but there are no pessimists among the people who designed, built, supported, or flew on the orbiting laboratory. They’ve made the preposterous an everyday reality. “For 20 years, we’ve had people living off the planet,” said Joel Montalbano, space station program manager. “And the fact that we could do that, and that we as a species are not bound to living on the surface of the planet, just shows you that greater things are possible. We, as a species, can do tremendous things when we partner with people from around the world, and the International Space Station is an example of that.” To learn more, visit: www.nasa.gov/station https://www.nasa.gov/mission_pages/station/research/benefits/index.html