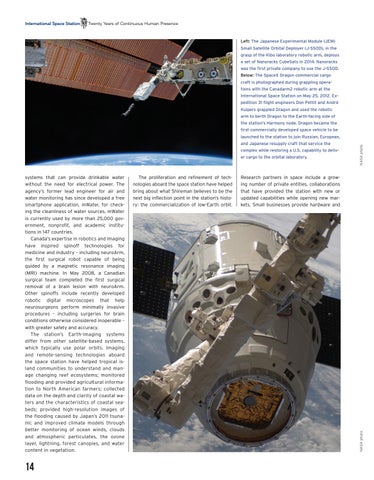 Left: The Japanese Experimental Module (JEM) Small Satellite Orbital Deployer (J-SSOD), in the grasp of the Kibo laboratory robotic arm, deploys a set of Nanoracks CubeSats in 2014. Nanoracks was the first private company to use the J-SSOD. Below: The SpaceX Dragon commercial cargo craft is photographed during grappling operations with the Canadarm2 robotic arm at the International Space Station on May 25, 2012. Expedition 31 flight engineers Don Pettit and André Kuipers grappled Dragon and used the robotic arm to berth Dragon to the Earth-facing side of the station’s Harmony node. Dragon became the first commercially developed space vehicle to be and Japanese resupply craft that service the complex while restoring a U.S. capability to deliver cargo to the orbital laboratory.

The proliferation and refinement of technologies aboard the space station have helped bring about what Shireman believes to be the next big inflection point in the station’s history: the commercialization of low-Earth orbit.

Research partners in space include a growing number of private entities, collaborations that have provided the station with new or updated capabilities while opening new markets. Small businesses provide hardware and

systems that can provide drinkable water without the need for electrical power. The agency’s former lead engineer for air and water monitoring has since developed a free smartphone application, mWater, for checking the cleanliness of water sources. mWater is currently used by more than 25,000 government, nonprofit, and academic institutions in 147 countries. Canada’s expertise in robotics and imaging have inspired spinoff technologies for medicine and industry – including neuroArm, the first surgical robot capable of being guided by a magnetic resonance imaging (MRI) machine. In May 2008, a Canadian surgical team completed the first surgical removal of a brain lesion with neuroArm. Other spinoffs include recently developed robotic digital microscopes that help neurosurgeons perform minimally invasive procedures – including surgeries for brain conditions otherwise considered inoperable – with greater safety and accuracy. The station’s Earth-imaging systems differ from other satellite-based systems, which typically use polar orbits. Imaging and remote-sensing technologies aboard the space station have helped tropical island communities to understand and manage changing reef ecosystems; monitored flooding and provided agricultural information to North American farmers; collected data on the depth and clarity of coastal waters and the characteristics of coastal seabeds; provided high-resolution images of the flooding caused by Japan’s 2011 tsunami; and improved climate models through better monitoring of ocean winds, clouds and atmospheric particulates, the ozone layer, lightning, forest canopies, and water content in vegetation.

launched to the station to join Russian, European,