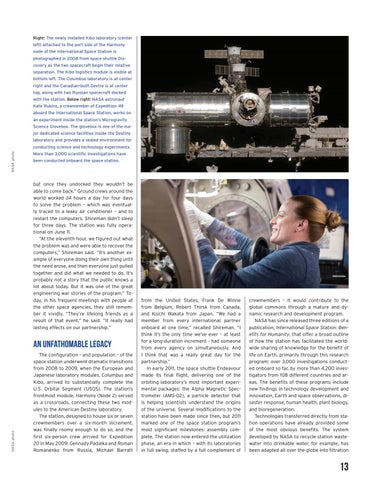 Right: The newly installed Kibo laboratory (center left) attached to the port side of the Harmony node of the International Space Station is photographed in 2008 from space shuttle Discovery as the two spacecraft begin their relative separation. The Kibo logistics module is visible at bottom left. The Columbus laboratory is at center right and the Canadian-built Dextre is at center top, along with two Russian spacecraft docked with the station. Below right: NASA astronaut Kate Rubins, a crewmember of Expedition 49 aboard the International Space Station, works on an experiment inside the station’s Microgravity Science Glovebox. The glovebox is one of the major dedicated science facilities inside the Destiny laboratory and provides a sealed environment for NASA photo

conducting science and technology experiments. More than 3,000 scientific investigations have been conducted onboard the space station.

but once they undocked they wouldn’t be able to come back.” Ground crews around the world worked 24 hours a day for four days to solve the problem – which was eventually traced to a leaky air conditioner – and to restart the computers. Shireman didn’t sleep for three days. The station was fully operational on June 11. “At the eleventh hour, we figured out what the problem was and were able to recover the computers,” Shireman said. “It’s another example of everyone doing their own thing until the need arose, and then everyone just pulled together and did what we needed to do. It’s probably not a story that the public knows a lot about today. But it was one of the great engineering war stories of the program.” Today, in his frequent meetings with people at the other space agencies, they still remember it vividly. “They’re lifelong friends as a result of that event,” he said. “It really had lasting effects on our partnership.”

AN UNFATHOMABLE LEGACY The configuration – and population – of the space station underwent dramatic transitions from 2008 to 2009, when the European and Japanese laboratory modules, Columbus and Kibo, arrived to substantially complete the U.S. Orbital Segment (USOS). The station’s frontmost module, Harmony (Node 2) served as a crossroads, connecting these two modules to the American Destiny laboratory. The station, designed to house six or seven crewmembers over a six-month increment, was finally roomy enough to do so, and the first six-person crew arrived for Expedition 20 in May 2009: Gennady Padalka and Roman Romanenko from Russia, Michael Barratt

from the United States, Frank De Winne from Belgium, Robert Thirsk from Canada, and Koichi Wakata from Japan. “We had a member from every international partner onboard at one time,” recalled Shireman. “I think it’s the only time we’ve ever – at least for a long-duration increment – had someone from every agency on simultaneously. And I think that was a really great day for the partnership.” In early 2011, the space shuttle Endeavour made its final flight, delivering one of the orbiting laboratory’s most important experimental packages: the Alpha Magnetic Spectrometer (AMS-02), a particle detector that is helping scientists understand the origins of the universe. Several modifications to the station have been made since then, but 2011 marked one of the space station program’s most significant milestones: assembly complete. The station now entered the utilization phase, an era in which – with its laboratories in full swing, staffed by a full complement of

crewmembers – it would contribute to the global commons through a mature and dynamic research and development program. NASA has since released three editions of a publication, International Space Station: Benefits for Humanity, that offer a broad outline of how the station has facilitated the worldwide sharing of knowledge for the benefit of life on Earth, primarily through this research program: over 3,000 investigations conducted onboard so far, by more than 4,200 investigators from 108 different countries and areas. The benefits of these programs include new findings in technology development and innovation, Earth and space observations, disaster response, human health, plant biology, and bioregeneration. Technologies transferred directly from station operations have already provided some of the most obvious benefits. The system developed by NASA to recycle station wastewater into drinkable water, for example, has been adapted all over the globe into filtration