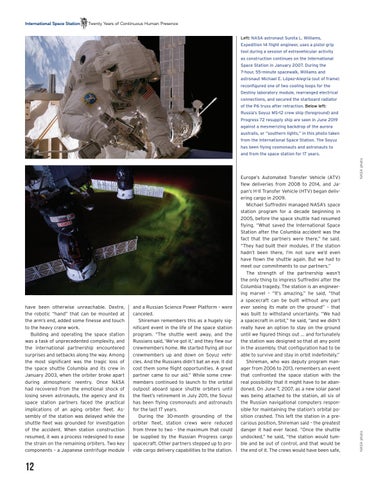 Twenty Years of Continuous Human Presence Left: NASA astronaut Sunita L. Williams, Expedition 14 flight engineer, uses a pistol grip tool during a session of extravehicular activity as construction continues on the International Space Station in January 2007. During the 7-hour, 55-minute spacewalk, Williams and astronaut Michael E. López-Alegría (out of frame) reconfigured one of two cooling loops for the Destiny laboratory module, rearranged electrical connections, and secured the starboard radiator of the P6 truss after retraction. Below left: Russia’s Soyuz MS-12 crew ship (foreground) and Progress 72 resupply ship are seen in June 2019 against a mesmerizing backdrop of the aurora australis, or “southern lights,” in this photo taken from the International Space Station. The Soyuz has been flying cosmonauts and astronauts to

and a Russian Science Power Platform – were canceled. Shireman remembers this as a hugely significant event in the life of the space station program. “The shuttle went away, and the Russians said, ‘We’ve got it,’ and they flew our crewmembers home. We started flying all our crewmembers up and down on Soyuz vehicles. And the Russians didn’t bat an eye. It did cost them some flight opportunities. A great partner came to our aid.” While some crewmembers continued to launch to the orbital outpost aboard space shuttle orbiters until the fleet’s retirement in July 2011, the Soyuz has been flying cosmonauts and astronauts for the last 17 years. During the 30-month grounding of the orbiter fleet, station crews were reduced from three to two – the maximum that could be supplied by the Russian Progress cargo spacecraft. Other partners stepped up to provide cargo delivery capabilities to the station.

have been otherwise unreachable. Dextre, the robotic “hand” that can be mounted at the arm’s end, added some finesse and touch to the heavy crane work. Building and operating the space station was a task of unprecedented complexity, and the international partnership encountered surprises and setbacks along the way. Among the most significant was the tragic loss of the space shuttle Columbia and its crew in January 2003, when the orbiter broke apart during atmospheric reentry. Once NASA had recovered from the emotional shock of losing seven astronauts, the agency and its space station partners faced the practical implications of an aging orbiter fleet. Assembly of the station was delayed while the shuttle fleet was grounded for investigation of the accident. When station construction resumed, it was a process redesigned to ease the strain on the remaining orbiters. Two key components – a Japanese centrifuge module

Europe’s Automated Transfer Vehicle (ATV) flew deliveries from 2008 to 2014, and Japan’s H-II Transfer Vehicle (HTV) began delivering cargo in 2009. Michael Suffredini managed NASA’s space station program for a decade beginning in 2005, before the space shuttle had resumed flying. “What saved the International Space Station after the Columbia accident was the fact that the partners were there,” he said. “They had built their modules. If the station hadn’t been there, I’m not sure we’d even have flown the shuttle again. But we had to meet our commitments to our partners.” The strength of the partnership wasn’t the only thing to impress Suffredini after the Columbia tragedy. The station is an engineering marvel – “It’s amazing,” he said, “that a spacecraft can be built without any part ever seeing its mate on the ground” – that was built to withstand uncertainty. “We had a spacecraft in orbit,” he said, “and we didn’t really have an option to stay on the ground until we figured things out ... and fortunately the station was designed so that at any point in the assembly, that configuration had to be able to survive and stay in orbit indefinitely.” Shireman, who was deputy program manager from 2006 to 2013, remembers an event that confronted the space station with the real possibility that it might have to be abandoned. On June 7, 2007, as a new solar panel was being attached to the station, all six of the Russian navigational computers responsible for maintaining the station’s orbital position crashed. This left the station in a precarious position, Shireman said – the greatest danger it had ever faced. “Once the shuttle undocked,” he said, “the station would tumble and be out of control, and that would be the end of it. The crews would have been safe,

and from the space station for 17 years.