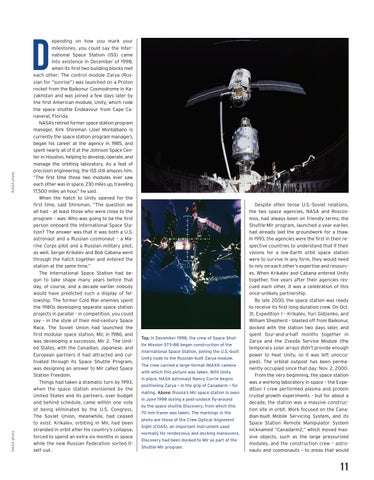 epending on how you mark your milestones, you could say the International Space Station (ISS) came into existence in December of 1998, when its first two building blocks met each other: The control module Zarya (Russian for “sunrise”) was launched on a Proton rocket from the Baikonur Cosmodrome in Kazakhstan and was joined a few days later by the first American module, Unity, which rode the space shuttle Endeavour from Cape Canaveral, Florida. NASA’s retired former space station program manager, Kirk Shireman (Joel Montalbano is currently the space station program manager), began his career at the agency in 1985, and spent nearly all of it at the Johnson Space Center in Houston, helping to develop, operate, and manage the orbiting laboratory. As a feat of precision engineering, the ISS still amazes him. “The first time those two modules ever saw each other was in space, 230 miles up, traveling 17,500 miles an hour,” he said. When the hatch to Unity opened for the first time, said Shireman, “The question we all had – at least those who were close to the program – was: Who was going to be the first person onboard the International Space Station? The answer was that it was both a U.S. astronaut and a Russian cosmonaut – a Marine Corps pilot and a Russian military pilot, as well. Sergei Krikalev and Bob Cabana went through the hatch together and entered the station at the same time.” The International Space Station had begun to take shape many years before that day, of course, and a decade earlier nobody would have predicted such a display of fellowship. The former Cold War enemies spent the 1980s developing separate space station projects in parallel – in competition, you could say – in the style of their mid-century Space Race. The Soviet Union had launched the first modular space station, Mir, in 1986, and was developing a successor, Mir 2. The United States, with the Canadian, Japanese, and European partners it had attracted and cultivated through its Space Shuttle Program, was designing an answer to Mir called Space Station Freedom. Things had taken a dramatic turn by 1993, when the space station envisioned by the United States and its partners, over budget and behind schedule, came within one vote of being eliminated by the U.S. Congress. The Soviet Union, meanwhile, had ceased to exist. Krikalev, orbiting in Mir, had been stranded in orbit after his country’s collapse, forced to spend an extra six months in space while the new Russian Federation sorted itself out.

Top: In December 1998, the crew of Space Shuttle Mission STS-88 began construction of the International Space Station, joining the U.S.-built Unity node to the Russian-built Zarya module. The crew carried a large-format IMAX® camera with which this picture was taken. With Unity in place, NASA astronaut Nancy Currie begins positioning Zarya – in the grip of Canadarm – for mating. Above: Russia’s Mir space station is seen in June 1998 during a post-undock fly-around by the space shuttle Discovery, from which this 70 mm frame was taken. The markings in the photo are those of the Crew Optical Alignment Sight (COAS), an important instrument used normally for rendezvous and docking maneuvers. Discovery had been docked to Mir as part of the Shuttle-Mir program.

Despite often tense U.S.-Soviet relations, the two space agencies, NASA and Roscosmos, had always been on friendly terms; the Shuttle-Mir program, launched a year earlier, had already laid the groundwork for a thaw. In 1993, the agencies were the first in their respective countries to understand that if their visions for a low-Earth orbit space station were to survive in any form, they would need to rely on each other’s expertise and resources. When Krikalev and Cabana entered Unity together, five years after their agencies rescued each other, it was a celebration of this once-unlikely partnership. By late 2000, the space station was ready to receive its first long-duration crew. On Oct. 31, Expedition 1 – Krikalev, Yuri Gidzenko, and William Shepherd – blasted off from Baikonur, docked with the station two days later, and spent four-and-a-half months together in Zarya and the Zvezda Service Module (the temporary solar arrays didn’t provide enough power to heat Unity, so it was left unoccupied). The orbital outpost has been permanently occupied since that day: Nov. 2, 2000. From the very beginning, the space station was a working laboratory in space – the Expedition 1 crew performed plasma and protein crystal growth experiments – but for about a decade, the station was a massive construction site in orbit. Work focused on the Canadian-built Mobile Servicing System, and its Space Station Remote Manipulator System nicknamed “Canadarm2,” which moved massive objects, such as the large pressurized modules, and the construction crew – astronauts and cosmonauts – to areas that would