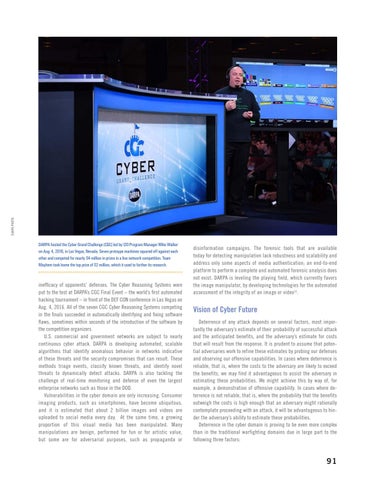 DARPA hosted the Cyber Grand Challenge (CGC) led by I2O Program Manager Mike Walker on Aug. 4, 2016, in Las Vegas, Nevada. Seven protoype machines squared off against each other and competed for nearly $4 million in prizes in a live network competition. Team Mayhem took home the top prize of $2 million, which it used to further its research.

inefficacy of opponents’ defenses. The Cyber Reasoning Systems were put to the test at DARPA’s CGC Final Event – the world’s first automated hacking tournament – in front of the DEF CON conference in Las Vegas on Aug. 4, 2016. All of the seven CGC Cyber Reasoning Systems competing in the finals succeeded in automatically identifying and fixing software flaws, sometimes within seconds of the introduction of the software by the competition organizers. U.S. commercial and government networks are subject to nearly continuous cyber attack. DARPA is developing automated, scalable algorithms that identify anomalous behavior in networks indicative of these threats and the security compromises that can result. These methods triage events, classify known threats, and identify novel threats to dynamically detect attacks. DARPA is also tackling the challenge of real-time monitoring and defense of even the largest enterprise networks such as those in the DOD. Vulnerabilities in the cyber domain are only increasing. Consumer imaging products, such as smartphones, have become ubiquitous, and it is estimated that about 2 billion images and videos are uploaded to social media every day. At the same time, a growing proportion of this visual media has been manipulated. Many manipulations are benign, performed for fun or for artistic value, but some are for adversarial purposes, such as propaganda or

disinformation campaigns. The forensic tools that are available today for detecting manipulation lack robustness and scalability and address only some aspects of media authentication; an end-to-end platform to perform a complete and automated forensic analysis does not exist. DARPA is leveling the playing field, which currently favors the image manipulator, by developing technologies for the automated assessment of the integrity of an image or video11.

Vision of Cyber Future Deterrence of any attack depends on several factors, most importantly the adversary’s estimate of their probability of successful attack and the anticipated benefits, and the adversary’s estimate for costs that will result from the response. It is prudent to assume that potential adversaries work to refine these estimates by probing our defenses and observing our offensive capabilities. In cases where deterrence is reliable, that is, where the costs to the adversary are likely to exceed the benefits, we may find it advantageous to assist the adversary in estimating these probabilities. We might achieve this by way of, for example, a demonstration of offensive capability. In cases where deterrence is not reliable, that is, where the probability that the benefits outweigh the costs is high enough that an adversary might rationally contemplate proceeding with an attack, it will be advantageous to hinder the adversary’s ability to estimate these probabilities. Deterrence in the cyber domain is proving to be even more complex than in the traditional warfighting domains due in large part to the following three factors: