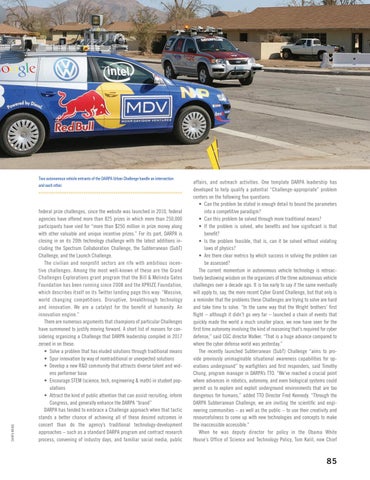 Two autonomous vehicle entrants of the DARPA Urban Challenge handle an intersection and each other.

federal prize challenges, since the website was launched in 2010, federal agencies have offered more than 825 prizes in which more than 250,000 participants have vied for “more than $250 million in prize money along with other valuable and unique incentive prizes.” For its part, DARPA is closing in on its 20th technology challenge with the latest additions including the Spectrum Collaboration Challenge, the Subterranean (SubT) Challenge, and the Launch Challenge. The civilian and nonprofit sectors are rife with ambitious incentive challenges. Among the most well-known of these are the Grand Challenges Explorations grant program that the Bill & Melinda Gates Foundation has been running since 2008 and the XPRIZE Foundation, which describes itself on its Twitter landing page this way: “Massive, world changing competitions. Disruptive, breakthrough technology and innovation. We are a catalyst for the benefit of humanity. An innovation engine.” There are numerous arguments that champions of particular Challenges have summoned to justify moving forward. A short list of reasons for considering organizing a Challenge that DARPA leadership compiled in 2017 zeroed in on these: • Solve a problem that has eluded solutions through traditional means • Spur innovation by way of nontraditional or unexpected solutions • Develop a new R&D community that attracts diverse talent and widens performer base • Encourage STEM (science, tech, engineering & math) in student populations • Attract the kind of public attention that can assist recruiting, inform Congress, and generally enhance the DARPA “brand” DARPA has tended to embrace a Challenge approach when that tactic stands a better chance of achieving all of these desired outcomes in concert than do the agency’s traditional technology-development approaches – such as a standard DARPA program and contract research process, convening of industry days, and familiar social media, public

affairs, and outreach activities. One template DARPA leadership has developed to help qualify a potential “Challenge-appropriate” problem centers on the following five questions: • Can the problem be stated in enough detail to bound the parameters into a competitive paradigm? • Can this problem be solved through more traditional means? • If the problem is solved, who benefits and how significant is that benefit? • Is the problem feasible, that is, can it be solved without violating laws of physics? • Are there clear metrics by which success in solving the problem can be assessed? The current momentum in autonomous vehicle technology is retroactively bestowing wisdom on the organizers of the three autonomous vehicle challenges over a decade ago. It is too early to say if the same eventually will apply to, say, the more recent Cyber Grand Challenge, but that only is a reminder that the problems these Challenges are trying to solve are hard and take time to solve. “In the same way that the Wright brothers’ first flight – although it didn’t go very far – launched a chain of events that quickly made the world a much smaller place, we now have seen for the first time autonomy involving the kind of reasoning that’s required for cyber defense,” said CGC director Walker. “That is a huge advance compared to where the cyber defense world was yesterday.” The recently launched Subterranean (SubT) Challenge “aims to provide previously unimaginable situational awareness capabilities for operations underground” by warfighters and first responders, said Timothy Chung, program manager in DARPA’s TTO. “We’ve reached a crucial point where advances in robotics, autonomy, and even biological systems could permit us to explore and exploit underground environments that are too dangerous for humans,” added TTO Director Fred Kennedy. “Through the DARPA Subterranean Challenge, we are inviting the scientific and engineering communities – as well as the public – to use their creativity and resourcefulness to come up with new technologies and concepts to make the inaccessible accessible.” When he was deputy director for policy in the Obama White House’s Office of Science and Technology Policy, Tom Kalil, now Chief