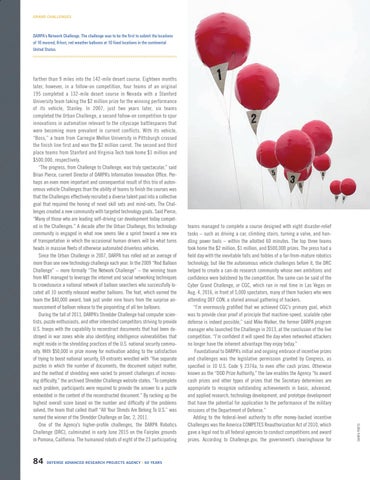 farther than 9 miles into the 142-mile desert course. Eighteen months later, however, in a follow-on competition, four teams of an original 195 completed a 132-mile desert course in Nevada with a Stanford University team taking the $2 million prize for the winning performance of its vehicle, Stanley. In 2007, just two years later, six teams completed the Urban Challenge, a second follow-on competition to spur innovations in automation relevant to the cityscape battlespaces that were becoming more prevalent in current conflicts. With its vehicle, “Boss,” a team from Carnegie Mellon University in Pittsburgh crossed the finish line first and won the $2 million carrot. The second and third place teams from Stanford and Virginia Tech took home $1 million and $500,000, respectively. “The progress, from Challenge to Challenge, was truly spectacular,” said Brian Pierce, current Director of DARPA’s Information Innovation Office. Perhaps an even more important and consequential result of this trio of autonomous vehicle Challenges than the ability of teams to finish the courses was that the Challenges effectively recruited a diverse talent pool into a collective goal that required the honing of novel skill sets and mind-sets. The Challenges created a new community with targeted technology goals. Said Pierce, “Many of those who are leading self-driving car development today competed in the Challenges.” A decade after the Urban Challenge, this technology community is engaged in what now seems like a sprint toward a new era of transportation in which the occasional human drivers will be what turns heads in massive fleets of otherwise automated driverless vehicles. Since the Urban Challenge in 2007, DARPA has rolled out an average of more than one new technology challenge each year. In the 2009 “Red Balloon Challenge” – more formally “The Network Challenge” – the winning team from MIT managed to leverage the internet and social networking techniques to crowdsource a national network of balloon searchers who successfully located all 10 secretly released weather balloons. The feat, which earned the team the $40,000 award, took just under nine hours from the surprise announcement of balloon release to the pinpointing of all ten balloons. During the fall of 2011, DARPA’s Shredder Challenge had computer scientists, puzzle enthusiasts, and other interested competitors striving to provide U.S. troops with the capability to reconstruct documents that had been destroyed in war zones while also identifying intelligence vulnerabilities that might reside in the shredding practices of the U.S. national security community. With $50,000 in prize money for motivation adding to the satisfaction of trying to boost national security, 69 entrants wrestled with “five separate puzzles in which the number of documents, the document subject matter, and the method of shredding were varied to present challenges of increasing difficulty,” the archived Shredder Challenge website states. “To complete each problem, participants were required to provide the answer to a puzzle embedded in the content of the reconstructed document.” By racking up the highest overall score based on the number and difficulty of the problems solved, the team that called itself “All Your Shreds Are Belong To U.S.” was named the winner of the Shredder Challenge on Dec. 2, 2011. One of the Agency’s higher-profile challenges, the DARPA Robotics Challenge (DRC), culminated in early June 2015 on the Fairplex grounds in Pomona, California. The humanoid robots of eight of the 23 participating

teams managed to complete a course designed with eight disaster-relief tasks – such as driving a car, climbing stairs, turning a valve, and handling power tools – within the allotted 60 minutes. The top three teams took home the $2 million, $1 million, and $500,000 prizes. The press had a field day with the inevitable falls and foibles of a far-from-mature robotics technology, but like the autonomous vehicle challenges before it, the DRC helped to create a can-do research community whose own ambitions and confidence were bolstered by the competition. The same can be said of the Cyber Grand Challenge, or CGC, which ran in real time in Las Vegas on Aug. 4, 2016, in front of 5,000 spectators, many of them hackers who were attending DEF CON, a storied annual gathering of hackers. “I’m enormously gratified that we achieved CGC’s primary goal, which was to provide clear proof of principle that machine-speed, scalable cyber defense is indeed possible,” said Mike Walker, the former DARPA program manager who launched the Challenge in 2013, at the conclusion of the live competition. “I’m confident it will speed the day when networked attackers no longer have the inherent advantage they enjoy today.” Foundational to DARPA’s initial and ongoing embrace of incentive prizes and challenges was the legislative permission granted by Congress, as specified in 10 U.S. Code § 2374a, to even offer cash prizes. Otherwise known as the “DOD Prize Authority,” the law enables the Agency “to award cash prizes and other types of prizes that the Secretary determines are appropriate to recognize outstanding achievements in basic, advanced, and applied research, technology development, and prototype development that have the potential for application to the performance of the military missions of the Department of Defense.” Adding to the federal-level authority to offer money-backed incentive Challenges was the America COMPETES Reauthorization Act of 2010, which gave a legal nod to all federal agencies to conduct competitions and award prizes. According to Challenge.gov, the government’s clearinghouse for

DARPA’s Network Challenge. The challenge was to be the first to submit the locations of 10 moored, 8-foot, red weather balloons at 10 fixed locations in the continental United States.