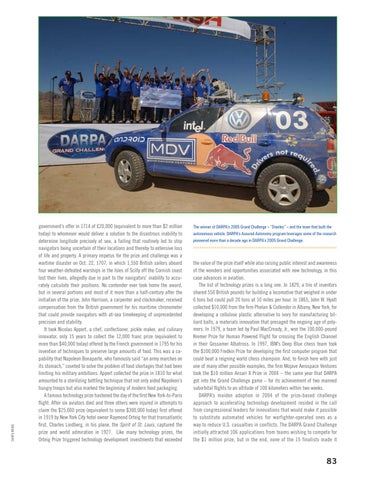 government’s offer in 1714 of £20,000 (equivalent to more than $2 million today) to whomever would deliver a solution to the disastrous inability to determine longitude precisely at sea, a failing that routinely led to ship navigators being uncertain of their locations and thereby to extensive loss of life and property. A primary impetus for the prize and challenge was a wartime disaster on Oct. 22, 1707, in which 1,550 British sailors aboard four weather-defeated warships in the Isles of Scilly off the Cornish coast lost their lives, allegedly due in part to the navigators’ inability to accurately calculate their positions. No contender ever took home the award, but in several portions and most of it more than a half-century after the initiation of the prize, John Harrison, a carpenter and clockmaker, received compensation from the British government for his maritime chronometer that could provide navigators with at-sea timekeeping of unprecedented precision and stability. It took Nicolas Appert, a chef, confectioner, pickle maker, and culinary innovator, only 15 years to collect the 12,000 franc prize (equivalent to more than $40,000 today) offered by the French government in 1795 for his invention of techniques to preserve large amounts of food. This was a capability that Napoleon Bonaparte, who famously said “an army marches on its stomach,” coveted to solve the problem of food shortages that had been limiting his military ambitions. Appert collected the prize in 1810 for what amounted to a sterilizing bottling technique that not only aided Napoleon’s hungry troops but also marked the beginning of modern food packaging. A famous technology prize hastened the day of the first New York-to-Paris flight. After six aviators died and three others were injured in attempts to claim the $25,000 prize (equivalent to some $300,000 today) first offered in 1919 by New York City hotel owner Raymond Orteig for that transatlantic first, Charles Lindberg, in his plane, the Spirit of St. Louis, captured the prize and world admiration in 1927. Like many technology prizes, the Orteig Prize triggered technology development investments that exceeded

the value of the prize itself while also raising public interest and awareness of the wonders and opportunities associated with new technology, in this case advances in aviation. The list of technology prizes is a long one. In 1829, a trio of inventors shared 550 British pounds for building a locomotive that weighed in under 6 tons but could pull 20 tons at 10 miles per hour. In 1865, John W. Hyatt collected $10,000 from the firm Phelan & Collender in Albany, New York, for developing a cellulose plastic alternative to ivory for manufacturing billiard balls, a materials innovation that presaged the ongoing age of polymers. In 1979, a team led by Paul MacCready, Jr., won the 100,000-pound Kremer Prize for Human Powered Flight for crossing the English Channel in their Gossamer Albatross. In 1997, IBM’s Deep Blue chess team took the $100,000 Fredkin Prize for developing the first computer program that could beat a reigning world chess champion. And, to finish here with just one of many other possible examples, the firm Mojave Aerospace Ventures took the $10 million Ansari X Prize in 2004 – the same year that DARPA got into the Grand Challenge game – for its achievement of two manned suborbital flights to an altitude of 100 kilometers within two weeks. DARPA’s maiden adoption in 2004 of the prize-based challenge approach to accelerating technology development resided in the call from congressional leaders for innovations that would make it possible to substitute automated vehicles for warfighter-operated ones as a way to reduce U.S. casualties in conflicts. The DARPA Grand Challenge initially attracted 106 applications from teams wishing to compete for the $1 million prize, but in the end, none of the 15 finalists made it