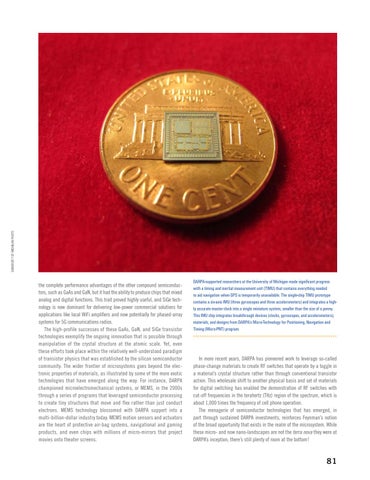 the complete performance advantages of the other compound semiconductors, such as GaAs and GaN, but it had the ability to produce chips that mixed analog and digital functions. This trait proved highly useful, and SiGe technology is now dominant for delivering low-power commercial solutions for applications like local WiFi amplifiers and now potentially for phased-array systems for 5G communications radios. The high-profile successes of these GaAs, GaN, and SiGe transistor technologies exemplify the ongoing innovation that is possible through manipulation of the crystal structure at the atomic scale. Yet, even these efforts took place within the relatively well-understood paradigm of transistor physics that was established by the silicon semiconductor community. The wider frontier of microsystems goes beyond the electronic properties of materials, as illustrated by some of the more exotic technologies that have emerged along the way. For instance, DARPA championed microelectromechanical systems, or MEMS, in the 2000s through a series of programs that leveraged semiconductor processing to create tiny structures that move and flex rather than just conduct electrons. MEMS technology blossomed with DARPA support into a multi-billion-dollar industry today. MEMS motion sensors and actuators are the heart of protective air-bag systems, navigational and gaming products, and even chips with millions of micro-mirrors that project movies onto theater screens.

DARPA-supported researchers at the University of Michigan made significant progress with a timing and inertial measurement unit (TIMU) that contains everything needed to aid navigation when GPS is temporarily unavailable. The single-chip TIMU prototype contains a six-axis IMU (three gyroscopes and three accelerometers) and integrates a highly accurate master clock into a single miniature system, smaller than the size of a penny. This IMU chip integrates breakthrough devices (clocks, gyroscopes, and accelerometers), materials, and designs from DARPA’s Micro-Technology for Positioning, Navigation and Timing (Micro-PNT) program.

In more recent years, DARPA has pioneered work to leverage so-called phase-change materials to create RF switches that operate by a toggle in a material’s crystal structure rather than through conventional transistor action. This wholesale shift to another physical basis and set of materials for digital switching has enabled the demonstration of RF switches with cut-off frequencies in the terahertz (THz) region of the spectrum, which is about 1,000 times the frequency of cell phone operation. The menagerie of semiconductor technologies that has emerged, in part through sustained DARPA investments, reinforces Feynman’s notion of the broad opportunity that exists in the realm of the microsystem. While these micro- and now nano-landscapes are not the terra nova they were at DARPA’s inception, there’s still plenty of room at the bottom!