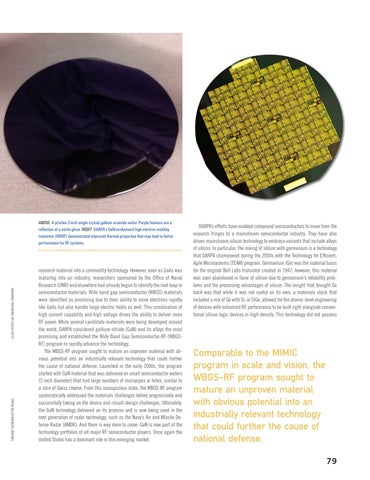 research material into a commodity technology. However, even as GaAs was maturing into an industry, researchers sponsored by the Office of Naval Research (ONR) and elsewhere had already begun to identify the next leap in semiconductor materials. Wide band gap semiconductor (WBGS) materials were identified as promising due to their ability to move electrons rapidly like GaAs but also handle large electric fields as well. This combination of high current capability and high voltage drives the ability to deliver more RF power. While several candidate materials were being developed around the world, DARPA considered gallium nitride (GaN) and its alloys the most promising and established the Wide Band Gap Semiconductor-RF (WBGSRF) program to rapidly advance the technology. The WBGS-RF program sought to mature an unproven material with obvious potential into an industrially relevant technology that could further the cause of national defense. Launched in the early 2000s, the program started with GaN material that was delivered on small semiconductor wafers (2-inch diameter) that had large numbers of micropipes or holes, similar to a slice of Swiss cheese. From this inauspicious state, the WBGS-RF program systematically addressed the materials challenges before progressively and successfully taking on the device and circuit-design challenges. Ultimately, the GaN technology delivered on its promise and is now being used in the next generation of radar technology, such as the Navy’s Air and Missile Defense Radar (AMDR). And there is way more to come: GaN is now part of the technology portfolios of all major RF semiconductor players. Once again the United States has a dominant role in this emerging market.

DARPA’s efforts have enabled compound semiconductors to move from the research fringes to a mainstream semiconductor industry. They have also driven mainstream silicon technology to embrace variants that include alloys of silicon. In particular, the mixing of silicon with germanium is a technology that DARPA championed during the 2000s with the Technology for Efficient, Agile Microsystems (TEAM) program. Germanium (Ge) was the material basis for the original Bell Labs transistor created in 1947; however, this material was soon abandoned in favor of silicon due to germanium’s reliability problems and the processing advantages of silicon. The insight that brought Ge back was that while it was not useful on its own, a materials stack that included a mix of Ge with Si, or SiGe, allowed for the atomic-level engineering of devices with enhanced RF performance to be built right alongside conventional silicon logic devices in high density. This technology did not possess

Comparable to the MIMIC program in scale and vision, the WBGS-RF program sought to mature an unproven material with obvious potential into an industrially relevant technology that could further the cause of national defense. 79